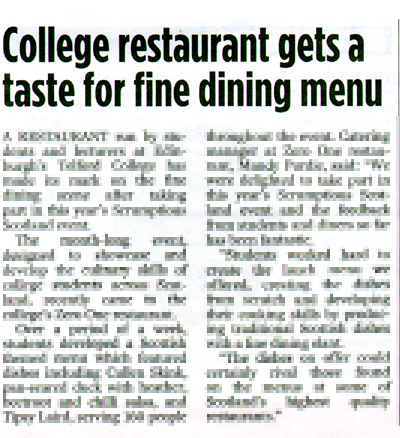 One of Scotland’s largest colleges which has a restaurant run by students has made its mark on the fine dining scene after taking part in the Skills Scotland initiative.

Edinburgh’s Telford College Zero One Restaurant took part in the event which is a part of Scottish Tourism Careers month and is designed to showcase and develop the culinary skills of college students across Scotland.

Over the period of a week students at Telford developed a Scottish themed menu which showed off delights such as Cullen Skink, pan seared duck with heather and tipsy laird. 160 people enjoyed the mouth watering menu.

Catering Manager at Zero One Restaurant, Mandy Purdie said: “We were delighted to take part in this year’s Scrumptious Scotland event and the feedback from students and diners so far has been fantastic.

“Students worked hard to create the lunch menu we offered, creating the dishes from scratch and developing their cooking skills by producing traditional Scottish dishes with a fine dining slant.

“The dishes on offer could certainly rival those found on the menus at some of Scotland’s highest quality restaurants.

This coverage was secured with the Edinburgh Evening News as part of a sustained PR campaign carried out by Holyrood PR on behalf of Edinburgh’s Telford College.