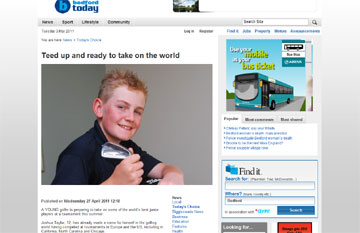 The U.S. Kids Golf European Championship has received another glowing piece of coverage in the UK regional media thanks to the expertise of Holyrood PR PR in Scotland.

The event, which is Europe’s biggest junior golf tournament, was featured in the web pages of Bedford Today in a report about how local youngster Joshua Taylor was set to compete against some of the world’s top players.

The European Championship, now in its fourth year, will see 500 kids from across the world competing on the links in East Lothian, Scotland, this summer. Players are split into different age groups and play across five historic courses in the region – competing for the title of European Champion and aiming to secure places at the prestigious World Championships at Pinehurst later this year.

You can read the full story about Joshua’s participation in the tournament on the Bedford Today website.