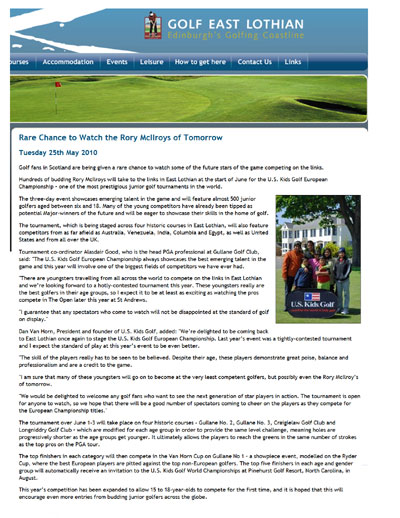 The European leg of the tournament has gained growing interest through the wealth of young talent on show – the article describes the event as: “one of the most prestigious junior golf tournaments in the world.”

Under the headline ‘Rare chance to watch the Rory McIlroys of Tomorrow’ – the talent on display was similar to that of McIlroy, a young British golfer, who has gained recognition and now plays on the professional stage.

The East Lothian Links will host the 3-day-event showcased the next generation of golfing talent – the championship saw children aged from 6 -18 years take to the green and play in a number of age and gender categories.

The competition took place along some of Scotland most picturesque links courses around East Lothian – Dan Van Horn US kids Golf founder and president, said:” We are delighted to be coming back to East Lothian once again to stage the US kids golf European Championships. Last years event was a tightly-contested tournament and I expect the standard of play at this year’s event to be even better.”

Each golfer was playing for the prestigious prize winning and automatic invitation to the US Kids Golf World Championships taking place at the Pinehurst Golf Resort, North Carolina, in August.

The article can be read in full on the Golf East Lothian website and was secured as part of a successful PR campaign carried out by the Holyrood Partnership.