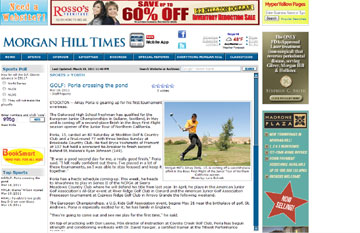 One of Europe’s leading junior golf tournaments is conitnuing to make waves among the local press – both at home and overseas.

The U.S. Kids Golf European Championship has been featured in the Morgan Hill Times – a prominent local newspaper in California – after one of its budding local golfers confirmed entry into the event.

15-year old Amay Poria was highlighted as one of the players to watch at this summer’s championship, which takes place on five historic courses in East Lothian. Almost 500 kids from across the globe are expected to attend the championship and compete for places at the prestigious U.S. Kids Golf World Championship at Pinehurst.

The full coverage can be viewed on the Morgan Hill Times website. The U.S. Kids Golf European Championship is once again being supported by the expertise of Holyrood PR PR in Scotland for its 2011 event.