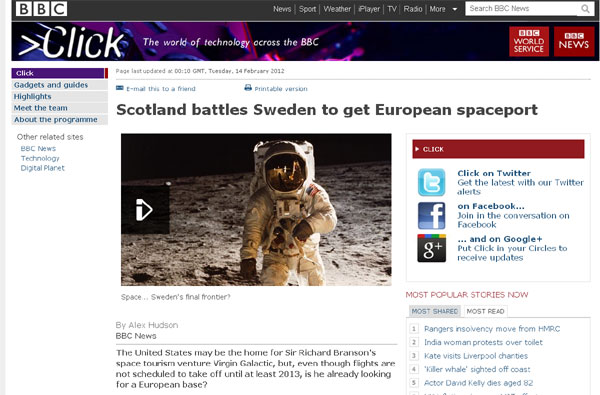 EVOLUTION OF THE HIPSTER (Aimee)

We’ve all seen em, flocking into the likes of Urban Outfitters thinking they’re finding something unique to don. And if they can’t find it there, they’re off to the local charity shop to rifle for a set of black framed glasses to go with their new braces, Inspector Gadget jaekits and bow tie-yes it’s the hipsters. Trashing the image of anything slightly unique or old-skool these social scenesters are everywhere and seem to have exploded onto the streets. However, this video by puppets Mario and Fafa (probably made by hipsters) sets to explain that hipsters have merely come from evolution and are the product of a mish mash of cavemen, Socrates, Beatnik, hippies and yuppies.
http://www.youtube.com/watch?v=jbTI7eWaQbk

The anticipation for the Virgin Galactic’s first flight to space is building ever day with multiple stories in the news about the quarter of a million pound chance to see the moon. With flights scheduled to take off in 2013, rumours are already circulating that Branson is looking for a European base for his space vehicles. Scotland is said to be the number one choice with RAF Lossiemouth being the largest and busiest fan jet base in the royal air force.  It seems perfect as the leading site for space tourism to take place in the UK. At least if you can’t afford to board in Scotland you can watch take off? http://news.bbc.co.uk/1/hi/programmes/click_online/9694766.stm

Google have marked Cupid’s big day by installing a themed animation on their homepage. The 71 second doodle acccompanied by Tony Bennett’s, ‘Cold, Cold Heart’ tells the story of a young boy’s attempt to woo his crush with a series of gifts. At first, he uses Google to search for tips and buys a series of gifts but his efforts are ignored by the girl who continues to skip. Out of ideas, he buys a skipping rope and joins in and she finally succumbs. At the end of the clip, a collage is pieced together illustrating all types of love. Very cute. Whether it was intended or not, it suggests the limitations of the company’s search engine when romance is thrown into the mix!
www.google.com

Lady Gaga and social network seemed to go hand in hand with the singer having a record 19 million followers on twitter. But now the meat-dress wearing phenomenon has decided to compete with Google+ and Facebook and has created her very own social netoworking site entitled ‘Little Monsters’. Called LittleMonsters, Gaga’s pet name for her trillions of fans, the site has launched as an invite-only beta–asking fans to submit their e-mail to request an invite and “be among the first to experience a new community only for little monsters.” Is this the start of a new craze? Will more celebs start their own social networking sites? Seems the whole world is going a bit social networking ‘Ga-Ga’
http://news.cnet.com/8301-17938_105-57374730-1/lady-gaga-social-network-is-for-little-monsters-eyes-only/

KENNY NOT THE PR KING (Laura)

As a Liverpool FC supporter this article in The Drum magazine caught my eye – partly because it was written by a supporter of rival team Everton but also because what it says makes a lot of sense. The article comes in response to the uproar at this weekend’s match between Manchester United and Liverpool, when Luis Suarez failed to shake hands with Patrice Evra reigniting the racism row which has followed the player for months now. Written by Jonathan Welsh, Director of Euro RSCG PR UK the article highlights how the comments from Liverpool manager Kenny Dalglish which defended the actions of Suarez, rather than the act itself which has got the media, pundits and fans talking and how the whole situation would have boiled over by now if the club had appropriate PR advice. Now I love King Kenny just as much as the next Liverpool supporter, but I don’t agree with his responses and find myself agreeing with the Evertonian PR expert – if he’d have had the backing and briefing from a competent media team the club and its players wouldn’t have faced as much scrutiny as they did. Football bosses should take note and read this piece before they feed their managers to the media lions.
http://www.thedrum.co.uk/opinion/2012/02/14/pr-analysis-kenny-dalglishs-gaffes-show-managers-need-pr-people-dug-out