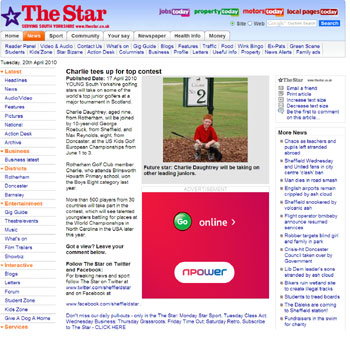 The U.S. Kids Golf European Championship has received another piece of online press coverage thanks to Holyrood PR PR in Scotland.

The tournament was featured in the pages of the South Yorkshire Star, which ran an article about young entrant and defending champion Charlie Daughtrey.

The 10-year-old from Rotherham is returning to defend the title he won at the championships in 2009. He will join hundreds of other young competitors from across the globe at the 3-day tournament in June.

You can see the full coverage on the South Yorkshire Star website,  which was the result of a sustained campaign by Scottish PR and social media experts the Holyrood PR.