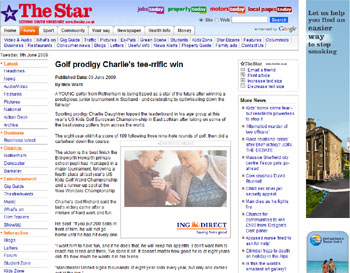 Edinburgh PR specialists the Holyrood PR have brought another newspaper success for U.S. Kids Golf after the prestigious European Championship was featured in the Sheffield Star.

The newspaper, which is distributed acropss the whole of the South Yorkshire region, published a story about young Rotherham golfer Charlie Daughtrey topped the leaderboard in his age category.

Eight-year-old Charlie was one of more than 430 youngsters from 34 countries taking part in the tournament, which was staged across five of the most prestigious courses in East Lothian. The competition featured some of the world’s best young players, who were battling for places at this year’s prestigious World Championships at Pinehurst.

The full story was featured in the Sheffield Star and came as the result of an ongoing media campaign by the Holyrood PR, which provides expert PR in Scotland.