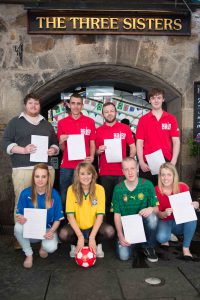 STAFF at a Scots bar have pledged to legally change their names to members of the Brazilian football team – if they win the World Cup this year.

13 members of staff at The Three SisterÕs pub in Edinburgh are prepared to permanently swap their names to those of the favourite South American team.

As Brazil are hosting the tournament, which kicks off this Thursday, manager Sharon Norris decided to make it ÒinterestingÓ for the staff.

They agreed to change their names via deed poll for a minimum of nine months, including changing their drivers license, passport and credit cards.

But staff are getting ÒnervousÓ as Brazil have been named hot favourites to lift the trophy in Rio de Janeiro, in one months time.

With Brazilian players such as Hulk, Cesar and Paulinho, staff will certainly never forget the World Cup of 2014.