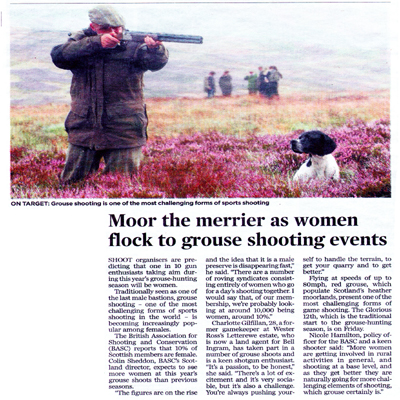 Perth based Bell Ingram in the spotlight after it is revealed that one in ten gun enthusiasts taking aim during this year’s grouse hunting season will be women.

Shooting as a sport has always been renowned for its male following but it has been reported by the  The British Association for Shooting and Conservation (BASC) that 10% of Scottish members are female.

This was confirmed by Charlotte Gilfillian, land agent for Bell Ingram who has taken part in many of the shoots. She said “There’s a lot of excitement and it’s very sociable, but it’s also a challenge. You’re always pushing yourself to handle terrain, to get your quarry and to get better.”

Charlotte is just one of the many women taking up the male dominated sport confirms Colin Sheddon, BASC’s Scotland director. “I would say that, of our membership, we’re probably looking at around 10,000 being women, around 10%.”

Bell Ingram is one of the UK’s best respected land and property experts and also offers a high quality sporting lets service.

The Full article appeared in The Scotsman and was secured as a part of a sustained PR campaign carried out on behalf of Bell Ingram by Holyrood PR.