Wish Away The Rain With 5 Sunny Stories 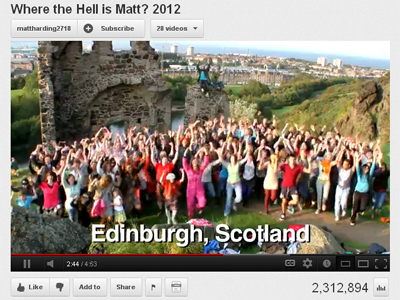 If you rated today’s links or want to suggest one for tomorrow, write on our Facebook wall or Tweet us.

WHERE THE HELL IS MATT (Victoria)

Imagine travelling the globe, visiting amazing locations, to be filmed doing a stupid dance and being paid to do so.
Well that is a reality for 35 year old American Matt Harding, who shot to internet fame in 2003 after a travelling video went viral, and led to sponsorship by Stride chewing gum and Visa.
Matt’s latest dancing video, the fifth in the series, was released last week and has already knocked up 2 million views.  The latest video shows him in 71 locations all over the world, including Rwanda, North Korea, Afghanistan, Haiti and our very own Edinburgh.
It is an incredible video which pulls on the heart strings – check it out!

HOLE IN ONE (Aimee)

The world is full of alternative cures for just about every ailment and Asia is one of the best at providing the rather unsusual.
Here’s another great example-asthma sufferers in India are treated by swallowing a live fish whole. The Goud family in Hyderabad claim that swallowing a live fish, covered in a fresh herb formula, will help solve asthma sufferers breathing problems.
Any willing participants in Scotland?

Pinterest is a wonderful method of self-expression that brings the art of collaging into the digital age in an organized and social format. For those who aren’t familiar with the website, users can upload their own images, “pin” images they find from the internet, and “repin” things they like that their friends pinned. People went along, clicking about like giddy schoolgirls, and then reality set in. In Pinterest’s fine print, “to the maximum extent permitted by law, the entire risk arising out of your access to and use of the site, application and services and site content remains with you.” Translation: if you pin or repin someone’s content without permission, or at least giving full attribution to its creator, that is copyright infringement and you are entirely liable. The problem is, then that Pinterest “defers the problem while enabling it.” It makes private, old fashioned collaging seem much more appealing, doesn’t it!!

A BIT O’ SPICE AT THE WESTEND (Gaynor)

Ever since I was young I have been a massive fan of West End shows. I remember my mum taking me to at least six or seven on our yearly trips to London. My first show was Mamma Mia, one of the best to ever grace the stage. This musical was brilliant- a bit of romance and of course Abba’s back catalogue of cheesy tunes! I’m now delighted to hear another childhood hobby of mine-the Spice Girls- are going to be gracing the West End. The writer of Mamma Mia along with the brilliant Jennifer Saunders has written a musical to end all musicals loosely based on the spice girls and their careers from the beginning. Viva Forever will open in December and I’m sure I’ll waste no time in getting down to see it!

CAUGHT IN A RIOT? THERE’S AN APP FOR THAT (Emily)

Anyone living or travelling to cities with a bit of angst might want to download this new new application developed by tech geniuses at TED. The app was recently exhibited at the TEDGlobal event in Edinburgh, and allows people in riots to point their phone in one direction or another, and if their phone isn’t stolen from them by pillaging rioters, it will show them a colour scale from red to green (red= danger, green=safety) so they can see in which direction they should run frantically.  See mum? I can go to Egypt and Greece no problem!