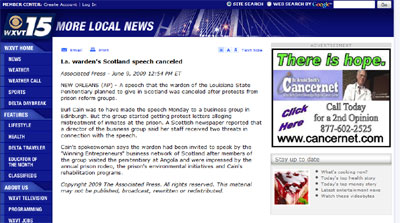 A TV channel in the United States has reported on a Scottish networking group’s decision to cancel a speaking event by the boss of a notorious American prison boss.

Edinburgh-based Winning Entrepreneurs is an invitation-only group for business founders and onwers in Scotland’s capital city.

Earlier this week members were due to attend an informal dinner in Edinburgh’s Prestonfield House Hotel, where Warden Burl Cain of Louisiana State Penitentiary was due to give a talk on leadership skills.

Now WXVT TV in Louisiana has reported on its website how the even had to be cancelled after Belinda Roberts of Winning Entrepreneurs said her team received menacing calls and emails from protest groups.

The article can be read at WXVT online and was circulated around the globe by Associated Press.