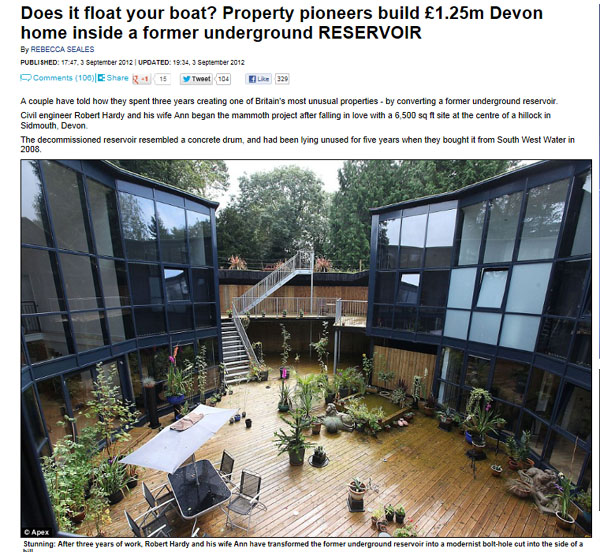 I have to admit – I am a bit of an architecture geek. There is nothing I love more than watching re-runs of Grand Designs, marvelling at the innovation, imagination and determined grit of those creating their dream home. And so, when routinely scrolling through the Daily Mail online (part of my unavoidable daily routine) I was immediately drawn to the article on a £1.25 million home built inside a former underground reservoir. The property has been developed by civil engineer Robert Hardy and his wife Ann, who began the mammoth project after falling in love with a 6,500 sq ft site at the centre of a hillock in Sidmouth, Devon. The practical difficulties implied by the site were what spurred the couple on, and the finished product looks well worth the time and financial investment. I want one.
http://www.dailymail.co.uk/news/article-2197707/Property-pioneers-build-1-25million-Devon-home-inside-underground-RESERVOIR.html?ito=feeds-newsxml

I am in absolute awe of the Paralympians – dubbed ‘Super Humans’ – especially Ellie Simmonds. Last night she added a bronze medal to her already golden collection – in her least favourite discipline. She is simply a brilliant swimmer whose talent and energy render questions of disability irrelevant. But more importantly for Ellie, her disability won’t inspire people the way that Olympians may have done. Instead, she wants her performance to prompt people to think; she wants a change in perception of what disability is. Well she’s getting there alright – she’s fifth favourite for BBC Sports Personality of the Year. Like I said, Super Ellie.
http://www.telegraph.co.uk/sport/olympics/paralympic-sport/9521364/Paralympics-2012-the-Ellie-Simmonds-legend-continues-to-grow-with-bronze-to-add-to-her-collection.html

THE GREAT BRITISH SMEG OFF (Gaynor)

For anyone who has been enjoying The Great British Bake Off you will have noticed the Smeg fridges that the contestants use to keep their ingredients for those marvellous cakes and other tasty treats in get a lot of camera time. However it doesn’t seem everyone is too happy about the reference to the famous fridge brand with a viewer writing in to complain that the logo was shown off a total of 37 times in one show. BBC rules state that producers must not feature products for cash or services and any brands on show must be editorially justified and given limited exposure. The problem seems to be that Smeg made a reference to the show on its site saying it had supplied them with fridges once again for free. It has now been asked to remove this reference.
http://www.huffingtonpost.co.uk/2012/09/04/the-great-british-bake-off-trouble_n_1854461.html

Having been put under the media spotlight recently, it is good to see that Samsung still has its sense of humor intact. Back in May Shane Bennet chanced his luck by sending a tweet to Samsung requesting a free phone. He attached a cute picture of a dragon to try and persuade Samsung to fulfill his request. Unfortunately, his drawing wasn’t quite enough for the company to give away a £500 phone, but it did reply to him with a cartoon drawing of its own. This in itself is fantastic. It is good to see a big brand engaging directly with its customers in a fun and interactive way, but what makes it better is that a few months later the exchange had grabbed the attention of many journalists so much so that Samsung thanked Shane for a lot of free PR by sending him a brand new Galaxy S3, customised with his drawing. It’s simple and probably didn’t break the Samsung piggy bank, but very, very effective.
http://prexamples.com/2012/08/samsung-thank-fan-who-sent-them-a-cute-dragon-drawing-with-a-free-customised-galaxy-siii/

Have you ever logged onto online chat website Chatroulette through curiousity? Rather rude isn’t it?A new, far cuter and fluffier alternative has been launched by a cat adoption shelter in Belgium called ‘Catroulette’ in which you are paired with moggies seeking a home.Like the original, you can press ‘next’ which takes you onto a new cat, but it does feel quite mean doing so.How did it take so long for someone to bring together two internet greats: Chatroulette and cats? Purrrfect.

Comments Off on IT Services firm clicks with employee ownership

Comments Off on IT Services firm clicks with employee ownership