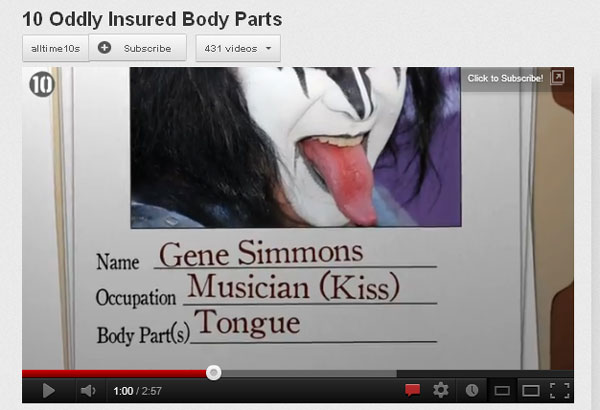 Celebrities have always been seen to do weird and wacky stuff, and sometimes there is some sense to them and others just seems plain bonkers. This list of the top 10 most oddly insured body parts just goes to show you, you can insure anything if the price is right. From the legs of Cristiano Ronaldo to the chest hair of Tom Jones, the list depicts what lengths celebs will go to protect their assets. As well as showing what parts are insured, it also lets you see how much they are insured for, with the Cristiano Ronaldo’s legs being insured for $144 million! Staggeringly there is more bizarre insured items on the list.

If you are a fan of programmes like Grand Designs or anything to do with building structures then this photo gallery is definitely one you want to see. A series of images from the World Architecture Festival Awards shows some of the marvels of the design world which some of them can only be looked at in awe. My personal favourite has to be P House in Singapore. I know it looks like tacky 80’s Hollywood hills house but I can’t help but want it!

Over the past 24 hours, the internet has been awash with rumours that a Facebook privacy glitch has resulted in private messages sent between 2007 and 2009 being posted publicly on timelines.
Before you panic that all of your inner-most secrets will be exposed, it has apparently only affected those in the U.S and France.
Facebook has denied the bug and stated that no private information has been exposed.
Some have even suggested that this rumour was created by the French media…
Whatever the truth, it may be worth scrolling back a few years on your timeline to check, just in case!

​8 APPS WORTH PAYING FOR (Sarah)

Here is something for all your smart phone owners and tech geeks out there. Mashgable.com has created a list of the top 8 apps that they think are worth paying for. Among the selection is ‘Instapaper’, an app which allows you to save online articles and read them offline at your convenience. Another called ‘Edit Photo’ app, the website claims turns every amateur photographer into a professional by allowing you to edit the pictures taken with your smart phone. With prices ranging from $0.99 to $4.99 these apps are sure to cater to most peoples needs – personally I would find the Swiftkey app the most useful as it lets users modify their Smartphone keyboard to make it more efficient and less prone to typos. Although perhaps, if I had a Smartphone myself, I would find the keyboard less confusing as it is.