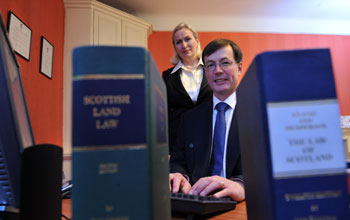 Social networking sites like facebook and twitter represent a major risk to relationships this Christmas and New Year and are set to become the biggest reason for couples divorcing or separating over the festive period.

Scottish family law firm Gibson Kerr believes that the popularity of social media could create a nightmare for couples over the Christmas and New Year period, when relationship tensions traditionally become heightened and the number of couples seeking divorce advice rises.

The firm highlights data from the Office for National Statistics which reveals that, while the overall UK divorce rate has declined in recent years, the number of 20 and 30-somethings who are separating is actually on the rise – with many of these couples citing unreasonable behaviour, such as using social media to reconnect with old flames, as a deciding factor ending their union.

And it says that, as the festive holidays usually bring additional relationship stresses from family commitments, money worries and a prolonged period of time away from work, social networking could prove the final straw for couples whose marriages are already on the rocks over Christmas.

Fiona Rasmusen, partner at Gibson Kerr, said: “Social media is increasingly becoming a big factor in divorce cases around the UK. Whether it’s due to one partner spending too much time on these websites, or using them to flirt with other users or cheat on their partner, sites like facebook and twitter are causing high tensions for many couples throughout the country.

“With so many younger people in their twenties and thirties using social networking sites on computers and mobile phones, it’s never been easier to connect with the virtual world. But the by-product of spending all your time on facebook or twitter is that it puts a strain on your own relationship – especially if one partner is using these sites to send sexually suggestive messages to old partners or to arrange extra-marital affairs.

“Due to the open, social nature of the internet, it’s also becoming increasingly difficult to keep any personal information secret. In the past, suspicious partners would have had rely on their own powers of deduction or to hire a private investigator to check if their spouse was having an affair – but nowadays they can find out simply by checking their partner’s social networking accounts.

“In recent years, we’ve seen an increasing number of people taking steps towards divorce proceedings thanks to information they have found out about their partner on facebook or bebo, and it is a trend that shows no signs of abating anytime soon.

“At Christmas time, couples have a lengthy holiday period away from work and – combined with all of the stress from family commitments, present buying and entertaining for guests that needs to be done over the festive period – it’s easy for a cheating partner to get careless when it comes to their online activities. With tensions at a high during this time of year, it could be the final straw for couples whose relationships are already feeling the strain.

“The festive period is always an extremely busy time for family lawyers and divorce firms, so we’re already planning on a similarly intense Christmas and New Year in 2011. We fully expect a large proportion of the calls we receive over the upcoming holidays to cite social networking among the reasons why people are seeking divorce advice, and we are preparing how best to deal with these queries.”

Fiona recommends that anyone who is considering divorce proceedings over the festive period should contact their solicitor for advice. She adds that by being able to speak with a solicitor without delay, unhappy partners could receive constructive help and advice that can perhaps diffuse a difficult situation – rather than let the resentment fester and cause problems further down the line.

Gibson Kerr is a family-run law firm that has been established in Edinburgh for more than 100 years. It has an excellent reputation for providing a comprehensive service encompassing both property and personal law, including divorce, powers of attorney, executries and wills.