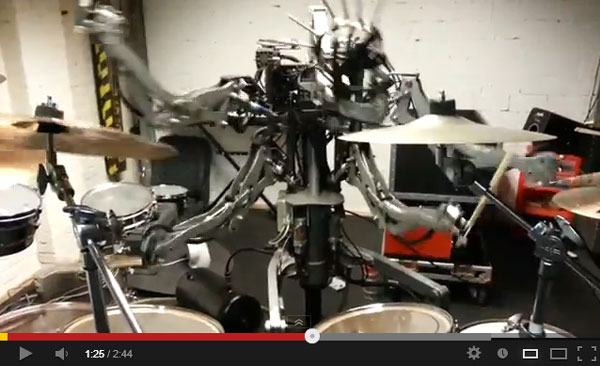 We all know that technology is always bettering itself, with newest models coming out every year and advancements in robotics leading the charge to many factory jobs. However, who would have thought that robots could be taking over the music industry and playing the literal meaning on heavy metal music. Check out the video of Berlin based rockers Compressorheads rocking out to their Robocross headquarters in Berlin.

Can we look forward to seeing more of this in the near future with more and more robot bands taking over. Who knows, we might even see them at T in the Park one year.

Stamped and Dolphin are not two words I think I have heard in the same sentence before, ever. However, a recent video that has gone viral after receiving over 200,000 views in a matter of a few short days after it was posted, shows just that, a Dolphin stampeded. A truly breathtaking sight, the video displays a rare display of 1,000 common dolphins off the coast of California. Captured on film by tour company Dolphin Safari, those who experienced the real thing were a group of captivated onlookers on a nearby whale-watching boat. Click on the link below for more and the video itself.

Luckily my nipper has never shown any compulsion for gaming – apart from the odd dancing workout on the Wii or an occasional dabble with Angry Birds or Temple Run. But I’ve heard tales of woe from other parents whose kids have to be pried away from consoles leaving them surly and uncommunicative.
One father in China was so fed up with his son’s constant gaming (it was stopping the teenager from job-hunting) he took radical steps – and hired a number of hitmen.
In this case the assassins were virtual – gamers whose characters were more advanced and more powerful than his son’s. He figured the laddie would soon get fed up playing if, every time he started a game, his character was promptly snuffed out.
Ahhhh, the joys of modern living, eh?

No doubt we will have acknowledged some of these hilariously funny video’s throughout the year. But if like me you’re in need of a pick me up on these dreary January days then check out the link below.

The guys over at the HuffingtonPost have out together a video of 2012’s viral highlights. Featuring some of the funniest and most foolish recordings of the past year. From Nick Clegg’s debut single the ‘Apology Song’, to Dragon Baby, the ice bomber and beyond.

Whether you’re stressed out or just bummed out take five and give one of these viral hits a gander.

Call me old fashioned but it seems recently there are more and more gadgets being invented for no particular reason and a new French product might just have taken the title for the world’s most useless gadget. French man, Jacques Lepine, unveiled the smart fork at yesterdays Consumer Electronics Show. Described as ‘intelligent cutlery’, the smart fork buzzes at you if it feels you are eating too fast. You are also able to link your smart fork to your smart phone through an app which allows you to keep a close eye on your eating habits. Not convinced? No neither am I…​