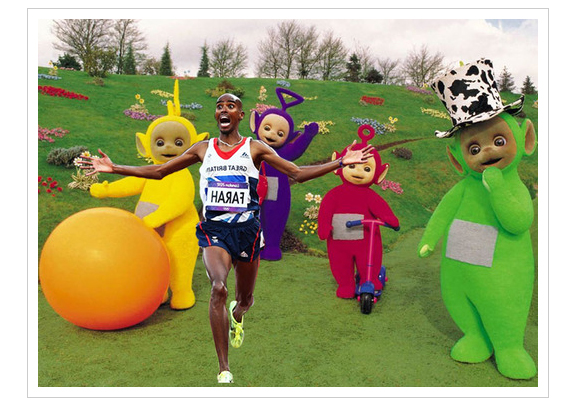 Got any suggestions for tomorrow’s blog or something to say on today’s? Let us know on our Facebook or Twitter pages.

Mo Farah has become the poster boy of the London Olympics since winning two gold medals in the athletics.
Tumblr is full of the weird and wonderful, including one of my favourite blogs, ‘Kim-Jong Il Looking At Things’.
A new account has cropped up entitled, “Mo Farah Running Away From Things” which shows shots of Mo photoshopped into hilarious scenes such as Jurassic Park and the Lion King.
I had quite a giggle!

SPLIT THE PRICE TO BEAT THE HIKE (Sarah)

I was getting a little sick of reading all the recent train ticket updates, if I’m honest, not because the rail ticket price hike does not enrage me, but more because no one seems to be offering any advice, merely protest. And then I hit upon this article in the Sun. Entitled ‘Legal ways to beat train ticket hike’ it was always going to be a winner. Among the authors suggestions are a) splitting your ticket – buy two cheaper tickets for different legs of your journey and b) buying a carnet – a batch of 12 tixkets for those who travel regularly, but not regularly enough to warrant a season ticket. The writer also suggests working from home – facilitated by home and smart-phone technology – as well as walking or cycling.

THE GOLD MEDAL FOR THE THREE RS (Scott)

If you go down to the woods today, you’re sure of a big surprise. This was the understatement of the year recently when, according to a Norwegian paper, Finnmarken newspaper, reported that a bear and her 3 cubs broke into a wooden lodge, ripping off the walls to gain entry, and consuming all its contents. This also happened to include 100 beers.

The bears also polished off a supply of marshmallows, chocolate spread and, the old cliche, honey. The cabin owner is now fearing that now the bears have a taste for beer they may try and return for more. Nothing beats an alcoholic bear.

YOU DON’T USUALLY SEE THIS AT THE AIRPORT (Graeme)

I don’t know about you, but when you’re standing at the baggage carousel, shattered after a long flight at an ungodly hour, the conveyor belt looks rather appealing. However, with the serious security on show at airports these days, I’m not brave enough to actually do it. But at Rome’s Fiumicino airport, one Norwegian tourist, after having a few too many drinks, was spotted in the foetal position, sleeping on the carousel. Witnesses say they saw him go round for about 50m. Once spotted in the X-ray machine, the unnamed man remained fast asleep even as the conveyor belt was halted and the police alerted.