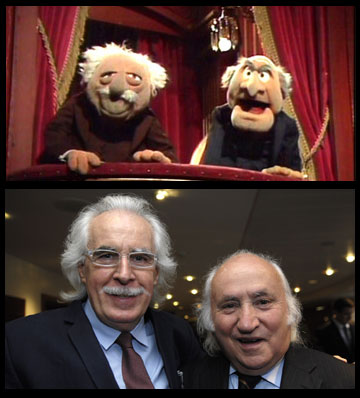 PR in Scotland is a pretty small fishpond.

Scottish PR agencies large and small depend on the patronage of the great and good in the business and cultural community.

So it wouldn’t ever do to offend anybody really important.

Deep breath.  I’ll just have to hope that giants of Edinburgh life, Charlie Miller and Richard Demarco, have a sense of humour.

When they were photographed together at the Edinburgh Chamber of Commerce AGM, only one thought sprung to mind – what a pair of Muppets!

In my defence, I refuse to accept that as any sort of insult.

Charlie Miller is the multi-millionaire founder of a Scottish institution – the family run hairdressing chain which carries his name. These days he is also a renowned business guru, passing on sage advice and his tried-and-tested business wisdom to a new generation of entrepreneurs. And that’s without even mentioning his quiet and generous charity work.

Then there’s Richard Demarco. You’d have to try hard to find a recipient of a CBE who did more tireless, ceaseless and selfless work to earn it. He has dedicated his entire life to promoting the arts, Edinburgh and Scotland. Unsurprisingly he has a thoroughly-deserved and comprehensive listing in Wikipedia. Yes, he really is that important.

Miller and Demarco have a lifetime of achievements to be proud of, and more than a few grey hairs between them to prove that they earned every single one of them. You certainly won’t find me ever saying a bad word about either.

But even men of their stature are dwarfed by the cultural and comedic icons that are Statler and Waldorf.

The Muppets were among the late 20th century’s most influential and recognisable TV creations. And Statler and Waldorf were among the funniest of the show’s memorable characters.

Here’s hoping two of Edinburgh’s finest share that sentiment, cos I’d hate to have this pair heckling me from the balcony  – or anywhere else!