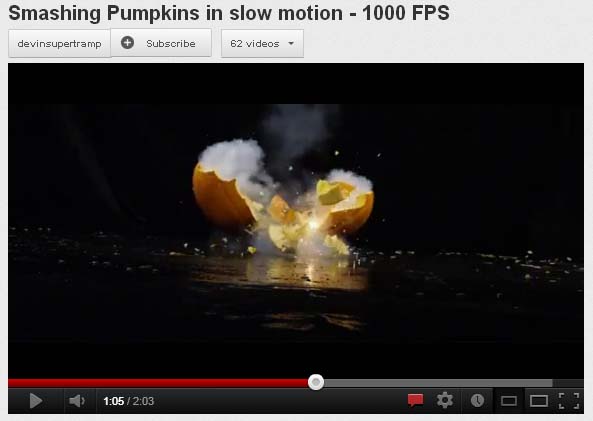 Fancy seeing your own link up on the blog? Get sending them in on Facebook and Twitter and see how they fare!

SMASHING PUMPKINS – NO, NOT THE BAND (Lewis)

It’s mid-October, and already people are planning what they are going to be doing for Halloween. Last year in the office we had a pumpkin carving competition, many of us dressed up and went out at night, who knows what we will do this year. But as a videographer, hiring a slow motion camera and smashing up pumpkins seems like a good idea. That’s exactly what these guys have done. What’s also amazing is the fact the pumpkins have been carved into scary faces, so all that time and effort to perfect the faces and then just to smash them up…poor pumpkins!

NOTHING TO HIDE CHARLIE? (Sarah)

I couldn’t believe it yesterday when Dominic Grieve, the attorney general, issued a veto on the publication of 27 letters between the Prince of Wales and ministers in the UK government. According to Grieve the letters, sent over a seven month period in 2004 and 2005, contained “particularly frank” and “most deeply held personal views and beliefs” of the prince. Yes, and? If he didn’t want people knowing the content, he shouldn’t have sent them. I would argue it is impossible for a member of the royal family, people of undeniable influence in this country, to send his personal views to ministers, those responsible for decision making and policy throughout the country, without anticipating that these opinions will influence said policy-makers. I would argue manipulation was his primary motive, and the idea that we are being denied the proof of this, fills me with disgust and disappointment. This is a democracy, and the royal family are symbolic figure heads for a reason – if we valued their opinion, we’d elect them. Rant over.

In what was a clever PR move, feminine hygiene brand Bodyform has produced a witty video in response to a man’s ‘time of the month’ rant which was posted on its Facebook page.
Richard Neill vented his frustrations at advertisers who make it out like women are having the time of their lives during their period, and said that as a boy he was jealous of all of the exciting things women did at this time, such as mountain biking, skiing and parachuting.
An actress playing the part of Bodyform’s CEO addresses Richard directly, and admits, “There is no such thing as a happy period. We lied to you Richard, and we want to say sorry.”

A Danish erotica website has recently launched an unusual competition in a bid to find the country’s smallest manhood. This strange event apparently follows on from an earlier contest to find “the most beautiful” tackle!

Contestants are encouraged to send an image of their erection with a measuring tape next to it, so far only six or seven men have been brave enough to participate. One thing is for sure there’ll be some seriously stiff competition!!

I’m sure like most fans of the British Bake Off there was an element of shock and surprise last night when John Whaite was announced as this year’s winner. More shock for me who was trying to understand why people were posting ‘go john’ on Facebook before he had even won. Or so I thought. I had completely forgotten I had paused the live programme before I had gone rummaging in my cupboard for the only sweet thing available- Coco Pops. Well you can imagine my surprise when John actually won; I had thought that my Facebook friends had predicted the future. No I was just five minutes behind everyone else.