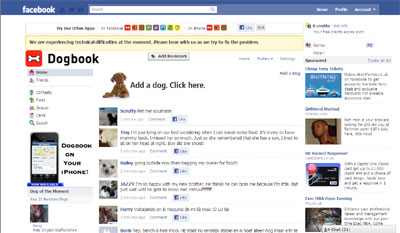 Had an interesting conversation with Belinda Roberts from Winning Entrepreneurs at today’s New Media Breakfast, about the phenomenon of pets on facebook and she told me to look up ‘Dogbook’ the new social media app, launched by facebook especially for dogs!

Immediately I thought what a crazy idea, but after quickly Googling the page when I got back to the office, I know now that Belinda wasn’t joking – there actually is a ‘doggy facebook’ app.

Whilst the furry creatures are unable to type their posts and upload their unbelievably cute pics themselves, the pages act as a way for proud pet owners to showcase their pets and keep others updated on their daily hijinks. The apps popularity is proved by the 91,000 likes that it has received to date, attracting pet owners from across the globe.

Once on the page, owners can regularly update their status to show what their dog is doing, tell people of the best parks they have found for dog walking and enter their dogs in Dog Walking competitions. Cat lovers can also get involved on the facebook action with ‘Catbook’ which is based around a similar premise.

Founded by Canadians Geoffrey Roche and his son Alex, the page attracts over 610,000 users and is just one example of a host of applications developed by third parties, which are now available to facebook users, alongside their regular profiles.

The staggering number of third party apps available to facebook users, now means that facebook has not only become a money making business for its founder Mark Zuckerberg, but also for other creative boffins quick to prove that there is an app for everything.

Facebook is no longer just a social network; it is a multi billion dollar business and it has also become an essential part of the way we communicate and the way we promote our businesses. There are very few successful businesses without a facebook page and facebook chat has become a cheaper and more convenient way to send text messages.

We can now use facebook on the move and through the power of technology we are also able to create personalities for our pets. The question remains – where now? What other weird yet wonderful things will facebook and the app world throw at us?

The sky’s the limit for tech PR team

Comments Off on A whirlwind month interning at Holyrood PR

The sky’s the limit for tech PR team