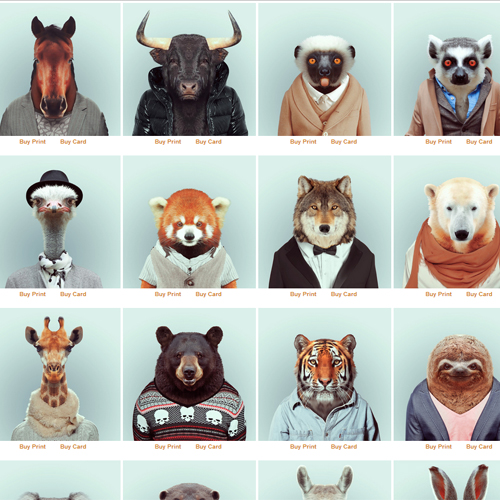 Have you got something to add to our fantastic five? Find us now on Facebook, Twitter, Linkedinand Google +

Yago Partal a Barcelona-based photographer has produced a series of humorous photos entitled ‘Zoo Portraits”. The collection depicts a variety of animals that have been dressed to resemble humans and the results are hilarious. Picture a pig donning a colourful Hawaiian shirt or a fierce bull in a bomber jacket. In fact, better still have a wee look on the website for more hilarious animal portraits.
http://www.zooportraits.com/

BATTLE OF THE SAXES (Lewis)

Commuters on a New York Subway were given an extra special ride when they were treated to a saxophone symphony between 2 sax players. In the video we here someone playing the sax and another quietly assembling his sax, all of a sudden they are both playing against each other, whilst subway riders join in with clapping. It does seem like this would have been an epic subway ride. The two mystical musicians were named as Sapphire Adizes and Zack Mayer. No doubt we will be seeing more battles on public transport down the line.
http://youtu.be/27Dx6ztJ8jw

TOP NINE PLACES YOU SHOULD AVOID GOING ON HOLIDAY (Melissa)

With the clocks changed and the days feeling longer, why not book yourself a holiday this summer? Just make sure you keep this handy list nearby of places you never want to visit. This should help you avoid any deadly botanic gardens, plumes of sulphur in the air, islands that will trap you for months and crocodiles infested waters. Good luck holiday hunting.
http://www.buzzfeed.com/chernobyldiaries/places-you-never-want-to-go-on-a-vacation

Our director Scott is always encouraging us to use social media, so much so that rarely a week goes by in which we are encouraged to try out the latest social media apps, so I think he would like this article on Mashable.com today which suggests that employees who use five or more social networks are likely to be more productive. A survey carried out by Evolv a start up that monitors metrics from Fortune 500 companies, indicate that social savvy workers are  likely to be better at sales and handling inquiries quicker than workers who aren’t so savvy. So while the article might not be saying to us to spend all our time facebooking and tweeting it does seem to show the benefit of letting employees express themselves via the social medium.
http://mashable.com/2013/04/02/social-networks-workplace-study/

MUSIC IS THE CURE (Aimee)

If my iPod crashes out of battery just before I’m about to leave for somewhere, anywhere no matter how far away, I’m near devastated. And I’m a certified expert for breaking or losing phones and MP3 players, the most heartbreaking seeing a new player going under the wheels of a van just as I’d uploaded tracks to it. Gutted. So I can completely relate to an article which tells us that music is medicine. Canadian psychologists from McGill University have shown that the neurochemical benefits of music can boost the body’s immune system, reduce anxiety, and help regulate mood. Group singing and drumming circles are also apparently a winner for multiple reasons. No unlucky sod needs to hear me belt out any tune but give me a bongo drum and I’ll give it my best bash.So lesson is: get the beats on whenever, wherever, whyever. Carry about some drums.
http://io9.com/can-music-be-more-effective-than-drugs-465249779