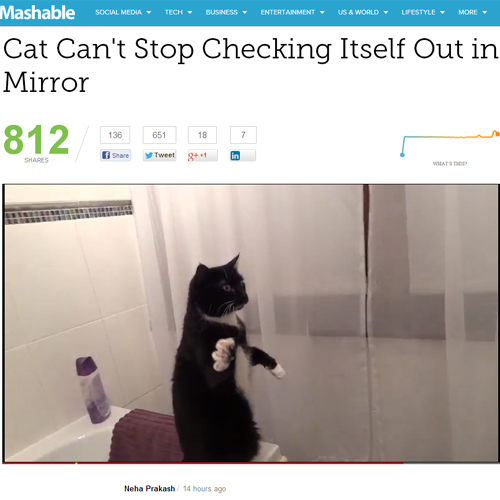 This morning I was thinking to myself, as I frantically cleaned my flat for a last minute inspection, split tea on my slippers, ate all of a mouthful of toast before throwing myself out the door, losing my library book on the way, that what I really need on a Tuesday morning is an amusing cat video. And, lo and behold, I am delivering such a treat to anyone who had an equally messy morning. Because I’m nice like that. Not that this cat is messy, in fact he thinks he looks so well groomed  he spends a serious amount of time checking himself out in the mirror….
http://mashable.com/2013/04/09/narcissistic-cat/

Gorilla hungry for a banana! (Rebecca)

At the Werribbe open-range zoo in Melbourne, Australia, Ella O’Brien and her sister Bridget were visiting. Whilst at an enclosure they came across Motaba the gorilla – a 29 year old silverback who ended up photobombing their photo from the trip. The two girls were posing in front of the enclosure with bananas in hand; it’s apparent that Motaba was hungry. There seems to be many photobombing animals but this instance has made the news!
http://metro.co.uk/2013/04/09/sisters-taunt-photobombing-gorilla-with-bananas-3589131/

Fussy eater? I bet you are not as fussy as this 18-year-old who is terrified of fruit and veg and will only eat noodles. 30 miles of instant noodles a year to be precise. Georgi Readma has been eating the quick dinners since she was five and cannot eat anything else due to a deep-rooted fear of other foods. If you think she is damaging her health then you are right, at 5ft 3in she weighs just seven stone and has the health equivalent to that of an 80-year-old. So if you mum tells you to eat your fruit and vegetables, my advice is to do as your told.
http://www.thesun.co.uk/sol/homepage/news/4879775/teen-eats-30-miles-of-instant-noodles-each-year.html

I SEE THE MOON (Aoibhínn)

Ron Miller a Minnesota-based writer and artist imagined what the night sky would look like if the Moon was replaced by other planets from our Solar system. Through his artistic ways Ron replaced the Moon with seven other planets. To grasp the difference better he kept the other planets at the same distance as the Moon is from the Earth, approximately 240,000 miles, without altering the sheer size of the other planets that make up our Milky Way. The results are phenomenal, take Venus for example, as it reflects six times more light that the Moon, the night would be as bright as day time. Mars on the other hand, although a similar size to the Moon, if it were to replace our night light we could clearly see details on the surface of the planet; watch ice caps grow and shrink with the change of seasons or see dust storms form and move across the planet. Just a pity it’s only imaginary!
http://www.demilked.com/moon-replaced-with-other-planets/

A man dressed up as the beloved Cookie Monster from Sesame Street, has been arrested after shoving a 2 year on New York’s Times Square. Osvaldo Quiroz-Lopez, who was dressed as the blue furry character from the children’s animated series, reportedly became agitated after the family refused to pay the tip for him posing for pictures. The mother of the toddler has told of her grief from other characters and how her son now hates Cookie Monster. I suppose that’s the way the cookie crumbles…
http://www.digitalspy.co.uk/odd/news/a471827/man-dressed-as-cookie-monster-arrested-for-shoving-child-in-street.html