Web Wonders To Combat A Wet And Windy Wednesday 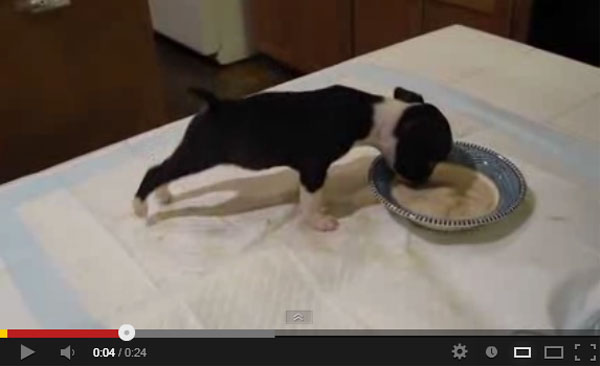 As you may know (and if you are a regular here it will have been hard to miss) a few of us amongst the Holyrood team cannot resist a cute animal – whether it belongs to a friend, appear in a viral photo, YouTube video or drop down for a visit from a balcony above the office. So, when I received the link to this adorable puppy clip, I had to look twice at the sender, who was the last person I expected to be the source of such fluffy cuteness. Aimee is probably best know for her high fives on the zombie apocalypse (so much so she has received emails from blog post fans pointing her in the direction of tips on how to prepare for such an apocalypse) or news featuring on weridasiannews.com. Yet here she was sending me the clip of a puppy getting so excited about its food it literally levitates its back legs, and as a result its whole body, into the bowl. So, this is not just for the animal fanatics amongst you – this video even appeals to the zombie aficionado.

If anything made me wish I’d listened to my mum and gran and not given up the piano it’s this clip right here.
Check out Scottish musician, Davos T Funk bashing away on the piano keys at a house party giving his audience pals house classics from the 90s.
Expect views of this video to explode. See how many golden oldies you can name- from Sweet Harmony to Strings of Life.

Coffee giant Starbucks recently asked customers to tweet some festive messages using #spreadthecheer. I am pleased to say the campaign went belly up when protesters hijacked it to complain about the coffee chain’s tax avoidance.

The firm displayed Twitter messages tagged #spreadthecheer on a large screen at the Natural History Museum where Starbucks is sponsoring the ice rink.

For more ‘cheerful’ tweets check out the link below.

GET UNISEX OVER BAKING (Sarah)

The fight for gender equality has a new champion in thirteen year old McKenna Pope who has been petitioning the makers of Easy-Bake Ovens to reinvent their creations with gender neutral packaging. Now for many of you, this fact will illicit groans of frustrated incomprehension, but as a fellow feminist and believer in gender neutrality I think she’s awesome. Probably, I’ll admit, the product of pushy parents, McKenna’s campaign has worked and Hasbro, the makers of the toys, are bringing out a new, silver, black and blue models in 2013. These ‘unisex’ ovens will be a development of the traditional pink and purple models aimed at young girls. What I would say, is given that the majority of celebrated chefs today are male, the pastel pink easy bake doesn’t seem to have out them off so far.

As the year is drawing close to a finish, a generation of technology and video lovers will remember all the great videos they have watched online. From the phenomenon that was Gangnam Style to music covers, this year has brought about some great videos for us to watch. Plus, with accessibility to recording equipment getting easier and the quality getting better, 2013 will definitely be a year for videos.