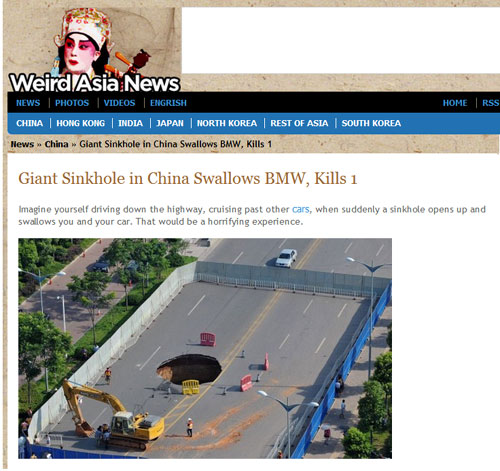 Our blog not enough to keep you web hungry fiends satisfied!? Well we’re also on Twitter, Facebook, Linkedin and Google +

If you read our Holyrood five often enough, you might have noticed that what normally catches my eye is usually on the cusp of shocking/sick! Today is no different as news hit of a 30 square metre sinkhole opening on the Xiangjiang Road in Changsha devouring a BMW and sadly it’s three passengers! One rescuer said the hole was so deep that the bottom couldn’t be seen by the naked eye! Terrifying stuff! The cause of it is still to be uncovered, if it ever is!
http://www.weirdasianews.com/2012/07/15/giant-sinkhole-kills-person-china/

RIHANNA’S BEING STYLED TO ROCK (Alix)

Not satisfied with dominating the charts and my iPod with catchy hits such as Umbrella and What’s My Name, Rihanna has co-produced her very own fashion show. The show, called Styled to Rock, will feature on Sky Living and documents her hunt to find the next ‘fashion sensation’ as aspiring designers compete to win the chance to create an outfit for her headlining act at this summer’s Wireless Festival in London. Since the festival was last week, we already know that the winning outfit comprised of a pair of lacy hotpants and a gold embellished crop top with a baggy peacock feather print jacket, but the winner is under-wraps until the show airs.

Being an avid fan of Rihanna and her often kooky style, I’ll be keeping my eyes peeled for the show’s debut!
http://www.hollywoodreporter.com/fash-track/rihanna-styled-rock-uk-fashion-series-348677

Ever worked in a large building and felt like you were following someone round in circles, reaching their last known location just as they left? I know I have. Working in a large concert hall (conveniently designed in the shape of a circle) meant I felt I was always chasing my tail as I tried to track someone down over 3 floors. However, the solution to this time wasting exercise could be on the horizon! Indoor Atlas, a Finland based startup, launched last week as a spin-off from the University of Oulu. The company have found a way to use the magnetic sensors in smartphones to locate people themselves-this time, indoors, where GPS signals don’t normally reach. As useful as this sounds, what would happen if you tracked your boss to the kitchen only to find him raiding somebody else’s lunchbox!? Awkward.
http://mashable.com/2012/07/16/indoor-atlas/

I am so fed up of everything Fifty Shades of Grey related. For weeks now people have been harping on about it, and the effect is that I refuse to read it point blank, out of sheer stubbornness.
The same thing happened with Harry Potter – I couldn’t stand all the hype and it made me so adament that I would not succumb …well I finally did and actually rather enjoyed it, but that’s another story.
ANYWAY, I am quite enjoying the various parody accounts that have cropped up on Twitter- @fiftyshadesofchav particularly.
It turns out the 36 year old mother from Gateshead has been revealed as the creator, and she now plans to publish her own X rated adventures centering around ‘Barry’.
Highlights include: “As he approached with those pasty white arms hanging out of his Umbro vest, his smile told me it was benefit day.”
http://www.dailymail.co.uk/femail/article-2173904/Fifty-shades-chav-Mothers-x-rated-novel-starring-chav-Barry-internet-sensation.html

The world seems to have gone a bit Facebook mad in recent years with endless conversations and products being created around the social media outlet. This new homage to the social media site is a bit of a strange one with luxury designer YSL creating eye shadows themed around the colours of the look of Facebook. With only 1,650 palettes for sale not sure I’m that dedicated to staying social!
http://www.brandingmagazine.com/2012/07/14/ysls-facebook-inspired-eyeshadow/