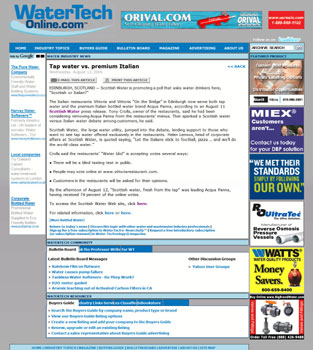 Staff at Edinburgh’s popular Italian restaurant Vittoria have been celebrating after securing new headlines in the UK’s specialist water magazines.

The restaurant, which is currently undertaking a Scotland vs Italy water taste test among its customers, was featured on the influential Water Tech news website.

The water magazine explained how Vittoria was running the poll among its customers in Edinburgh in order to decide which was better – Scottish tap water or Italian bottled Aqua Panna. Restaurant owner Tony Crolla has said that he will consider scrapping the water that loses from his menu, and the competition has won the backing of influential figures at Scottish Water.

The full story appeared in Water Tech and was the result of a sustained media and PR campaign by Edinburgh public relations experts the Holyrood PR.