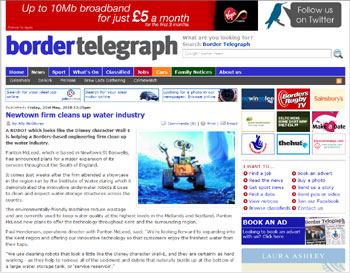 The firm was featured prominently in the Border Telegraph, which reported on how it would be providing its services for Scottish Water as part of a new framework agreement.

Under the deal, Panton McLeod is cleaning, inspecting and repairing around 400 water storage tanks for Scottish Water over the coming months. As part of the work, the firm will be deploying its innovative underwater robots – which have been likened to the Disney Pixar character Wall-E.

The full article can be viewed on the Border Telegraph website and was the result of a PR in Scotland drive by the Holyrood PR.