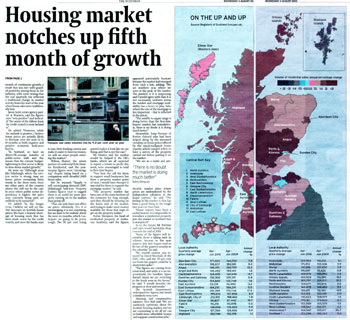 Edinburgh legal expert Warners has been celebrating after receiving a glowing piece of coverage in the national press.

The Scotsman extensively quoted the firm in a property analysis feature, which looked at how house prices were continuing to rise across the country.

The article was prompted by the latest report by the Registers of Scotland, which showed the house prices has risen over the past three months. Warners estate agency partner Jason Scott said that he felt prices would fluctuate for the rest of the year, but would start to rise properly in 2011, as the shortage of new homes starts to push up demand for properties in Scotland.

The full article can be viewed on The Scotsman’s website and was the result of a sustained campaign by Holyrood PR PR in Scotland.