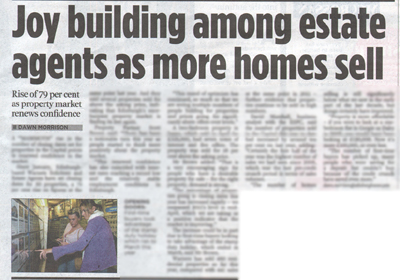 Since January, Warners Solicitors and Estate Agents have set closing dates for 50 properties, which is a huge 79% rise on figures at the same point last year.

Scott Brown, Property Partner at Warners, said: “There has been a noticeable turn this year as people started to think more positively about the property market.

“This renewed confidence has also coincided with interest rates reaching a record low and the relatively stable employment conditions in Edinburgh.

“This mood of optimism has since continued, so much so that we are seeing multiple numbers of people bidding for properties and prices going for significantly above offers-over levels.

“In one recent case, we had seven notes of interest and five offers at a closing date for a property in Joppa with the property going for 18% above the asking price.  That is a very encouraging sign for people who have a desirable property for sale – for the right property demand is strong.

“The percentage of properties going to closing dates this year has increased rapidly – we surpassed 2011’s level in mid April which we are taking as a positive indicator that the market is improving.”

Scott believes that first time buyers looking to take advantage of the stamp duty holiday which ended in March contributed significantly to this number.

The firm has sold 460 residential properties so far this year, compared to 441 sales at the same point in 2011, further evidence that properties are continuing to be sold in high numbers.

Scott Brown said: “2012 has started with a strong footing in the market which is illustrated by the demand we have had for our properties and it would seem that continued stability in the local market is to be welcomed over the coming months.

“There is a lot of activity in the market and people are beginning to regain their confidence to move again, with prices slowly stabilising over the past two years.”

A prosperous start to the year doesn’t end there for Warners as it follows on the recent success of the estate agents securing its status as Edinburgh’s top property firm.  Warners was awarded the unofficial title of ‘Top Estate Agent’ by the ESPC network earlier this year, for the 13th consecutive year.

More info about the firm can be found on the website www.warnersllp.com

This coverage was achieved by Holyrood PR on behalf of Warners. The original article can be viewed here.