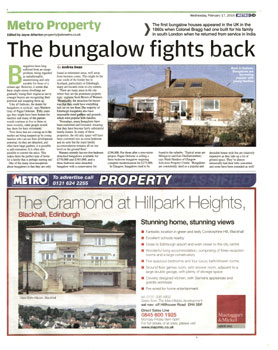 Edinburgh’s leading property solicitor Warners has been featured in the pages of a national daily newspaper.

The Metro featured the firm prominently in a recent article about the popularity of bungalows among house buyers and sellers in Scotland.

In the article, Warners estate agency partner Scott Brown explained that the market for bungalows had remained stable in Edinburgh in recent months. He added that the properties were traditionally popular in the Capital, as they provided an ideal place for families to relocate out of the city centre.

The article appeared in The Metro and was the result of a Scottish PR campaign maintained by Edinburgh social media experts the Holyrood PR.