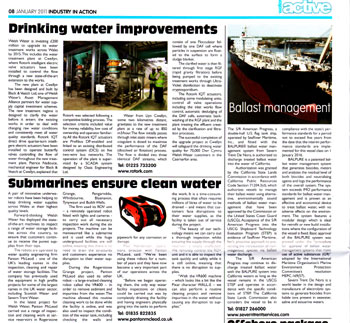 The firm was featured in the pages of respected industry journal Water Active, which reported on how its innovative robots had helped to keep water supplies in Wales at their purest levels.

Panton McLeod used a machine called the VR600 – which resembles the Disney Pixar character Wall-E – to inspect and clean a series of huge underground tanks that are used to store drinking water before it is sent to customers taps. The machines are able to clean sediment from the facilities while they are still operational – meaning there is no disruption to supplies.

The full story can be viewed on the Water Active website and was the result of a sustained campaign maintained by Holyrood PR PR in Scotland.