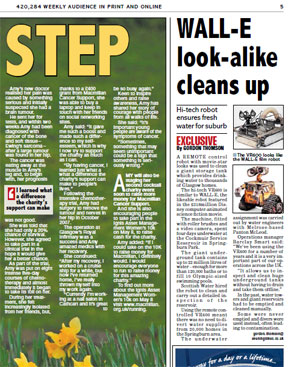 PR in Scotland for water experts

Water quality engineering firm Panton McLeod has received a major bbost to its PR credentials after being featured in Glasgow’s evening newspaper.

The Evening Times ran a feature about the firm’s latest underweater robot work in Glasgow, which involved engineers cleaning a huge underground service reservoir in the city that stores millions of litres of drinking water for local households.

The project involved Panton McLeod deploying the robot  into the huge facility while it was still active and online – ensuring that sediment could be removed from the floor of the tank without the need to drain it first. The innovative work meant that there was no disruption to supplies during the project and residents in Glasgow enjoyed uninterrupted access to water while the facility was being cleaned.

The robot, known as the VR600, has been utilised in numerous other projects across the UK for some of the biggest names in the water sector, including Scottish Water and Severn Trent Water.

The Evening Times coverage was achieved thanks to the ongoing public relations support that Panton McLeod received from PR in Scotland experts the Holyrood PR.