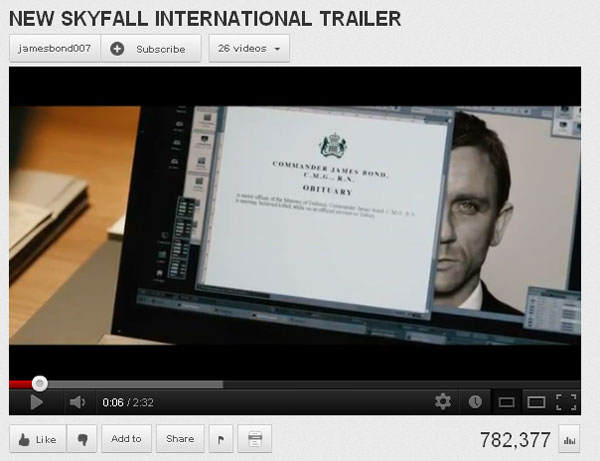 BOND IS BACK (Victoria)

The latest Bond movie, Skyfall is possibly the most highly anticipated release of the year, and I personally cannot wait until it hits screens in October.
Skyfall, which is the 23rd official Bond film, sees Daniel Craig return as Ian Fleming’s dapper British MI6 agent.
Fans got excited yesterday when the first proper trailer was released which looks to be full of explosions, fire fights and huge action scenes, and it looks to not disappoint.
http://www.youtube.com/watch?v=vgr2syY_OU4&feature=g-hist

For anyone reading this who knows me – future birthday/Christmas present SORTED. Despite having played both basketball and netball in my youth (I was a late bloomer, boys didn’t come on the scene till I was nearly in my 20s) I am rubbish at throwing – and even worse at getting stuff to land anywhere near what I’m aiming at. Despite this, I am forever attempting to get tissues (yay for a summer of no sun but increased hay-fever), wrappers and the scratch cards that come in magazines into the bin by my desk. And I fail 9 times out of 10 (the bin sits approx. 1ft away from me). So, this ingenious new product developed in Japan is right up my street; a bin that MOVES to catch your rubbish! The Smart Trashbox uses sensors to monitor and track the trash as it is thrown, calculates its trajectory and moves underneath using its motorized wheel base to catch it. Genius!
http://mashable.com/2012/07/25/smart-trashcan/​

Yes, I know the title is misspelled! But then, I’m the video guy, so I usually ask my words-based colleagues to give my writing the quick once over.
Do you ever find yourself questioning the spelling of a word you have just written in a media release, email or even tweet? In PR terms, media releases should ideally be mistake-free. However, there are certain words which are banana skins for wordsmiths and invariably result in spellcheck confusion.
The PR Daily has listed the top 50 words which regularly trip up PR people. Even this list is debatable (tricky word itself!), since we Brits spell ‘manoeuvre’ differently from the way listed by our American cousins). Arethere any other words that catch you out?
http://www.prdaily.com/Main/Articles/4e51f5c4-1119-493c-b6a3-ee5ae58a4ca5.aspx

Nipple twisters, chinese burns, head noogies and wet willies can stand aside because I’ve found a new affectionate past time in the form of Kancho from Japan! This personal space invasion is apparently an ancient tradition which involves the art of clasping your hands together and poking someone in the sphincter!
A mate of mine told me his friend is teaching in Japan and true to the rumours, as a foreigner he is a major target for the finger jabs!
Check out the game which gives you some targetting practice! As with most things I find from Japan, this is pretty bizarre!
http://www.kancho.org/

Here’s a question for you. When was the last time you saw empty seats on Wimbedon’s Centre Court? While exploring the the ongoing public outrage at the vast amounts of emtpy Olympic seats, I came across something I don’t think I’ve ever seen before – a picture of many empty seats on Centre Court. In the run up to the games, the media portrayed Olympic tickets to be like the ‘Golden Tickets’ featured in Roald Dahl’s Charlie and the Chocolate Factory, with Olympics fans struggling to get their hands on them; some even trying through foreign websites in the hope that demand wouldn’t be as great via overseas channels. So why all the empty seats? It is widely believed that many of these seats are situated in the corporate areas, belonging to sponsors etc. This begs the question, is BIG business ruining the olympics, and even sport general?