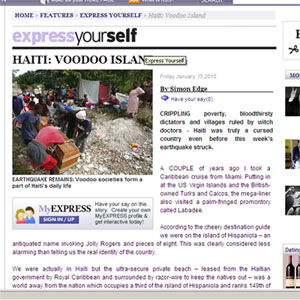 Do you believe in curses?

It seems that the Daily Express does, or at least editorial that rides on ogling at such mythology.

The article on the recent natural disaster in Haiti in today’s paper was headlined “HAITI: VOODOO ISLAND”, with Simon Edge’s piece following with the observation that: “Haiti was truly a cursed country even before this week’s earthquake struck.”

While his observations on the Caribbean island’s society and history are interesting, and anything that promotes awareness of the country’s current plight is to be welcomed, referring to: “Crippling poverty, bloodthirsty dictators and villages ruled by witch doctors” does not exactly help to connect curious readers with the very human disaster unfolding as we speak.

Edge’s revelation that his expertise on the situation comes from visiting Haiti during a “Caribbean cruise from Miami a couple of years back” does not instill hopes of further enlightenment.

Historical information follows, but the tone invokes yesterday’s Express article where US evangelical broadcaster Pat Robertson was reported to have claimed Haiti has been “cursed” because of what he called a “pact with the devil” in its history.

What a start to 2010 – hundreds of thousands of people are awaiting aid and educated folk are murmuring away about witch doctors.

Last time I checked, Haitian beliefs had very little influence over the movement of the earth’s tectonic plates.

More talk of aid and less ogling at witchcraft please.