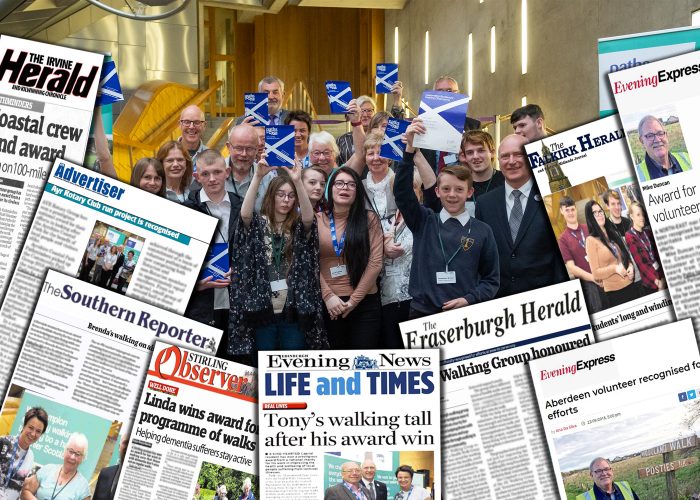 TO celebrate Paths for All’s Volunteer Awards 2018, we told the stories of ­this year’s amazing award winners. From the Highlands to the Borders, the ceremony saw a number of the nation’s volunteers win prizes for their efforts in transforming paths and parklands, as well as community walking habits in their local areas.

One of the winners included Ayrshire volunteer group, Ayrshire Coastal Path Pathminders (ACP), who scooped up the Community Path Group of the Year award in light of their efforts to maintain a 100-mile long coastal path.

An ex-PE teacher, Brenda Robertson, was also recognised, taking home the Macmillan Walk Leader award. Organising supportive walks in the Borders for people living with cancer, Brenda’s commitment has proven transformational for both the physical and mental wellbeing of the members in her community.

Amongst the champions was also Linda Shields. Devoting 20 hours a week to volunteering, Linda’s involvement has helped to achieve a 50% increase in the number of participants at Stirling’s Dementia Friendly Health Walks. Linda was presented with a Dementia Friendly Volunteer of the Year award for her continuous efforts in making sure that those living with dementia don’t miss out on regular walks in their local community.

The stories and devotion of the volunteers captured the attention of the local and regional press, with the highlights including:

Paths for All donates thousands of pounds worth of grants to transformative projects that boost health, promote walking and improve environments for people to be active in.

Broad coverage across regional, local and specialist media ensures a continuous spread of awareness around the charity’s efforts in transforming public areas around Scotland and the various benefits it brings to local communities.

Positive media reports help to advance the charity’s work by bringing in more volunteers and participants, ultimately assisting Paths for All in creating a happier, healthier Scotland trough walking.

WANT TO FIND OUT HOW OUR TEAM OF CHARITY PR EXPERTS CAN HELP PROMOTE THE STORIES OF YOUR ORGANISATION?