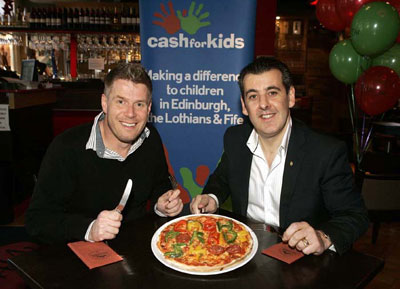 An award-winning Italian restaurant group has raised more than £7000 for a children’s charity thanks to hugely successful kid’s dining scheme.

Edinburgh restaurants Vittoria, Vittoria on the Bridge and La Favorita have announced they raised £7388 in 2009 for the Forth One and Forth2 Cash for Kids appeal after introducing a special credit crunch-busting meal deal.

Under the scheme, each restaurant offers a full £5.50 child’s meal for kids under 12 eating with an adult for a £1 – with all of the money donated to the Edinburgh-based charity.

Owner Tony Crolla has already committed to continue the initiative in 2010 and hopes to secure even bigger result for the charity which provides grants for disabled and disadvantaged children in Edinburgh, the Lothians and Fife.

Tony said: “We are really pleased with the fantastic amount of money we have been able to raise in 2009, which is all the more remarkable as we only started the scheme in April.

“We’ve had thousands of families taking up on the offer, and although this has represented a major commitment for us and our three restaurants, we know this is such a worthy cause.

“This year we’re going to try to achieve an even bigger amount for the charity and hope new families – as well as those who have enjoyed it before – will come and take advantage of this offer.”

Issued on behalf of Vittoria by the Holyrood PR, PR in Scotland.