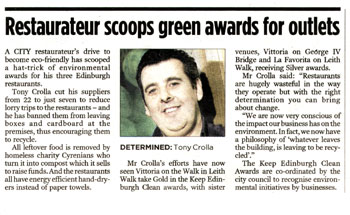 Leading Edinburgh restaurant Vittoria recently won three coveted environmental awards – and the story has been featured in the latest edition of the Capital’s daily local newspaper the Evening News.

Vittoria’s three venues – Vittoria on the Bridge, Vittoria on the Walk and La Favorita – were presented with gold and silver awards as part of the city council’s Keep Edinburgh Clean award scheme.

Vittorias was praised for its waste management and recycling initiatives which have been introduced in recent years. The news is particularly impressive, as the environmental awards are usually won by offices and big businesses in the city, rather than individual restaurants.

Owner Tony Crolla said: “Restaurants are hugely wasteful in the way they operate but with the right determination you can bring about change.

“We are now very conscious of the impact each and every area of our business has on the environment.  In fact, we now have a philosophy of ‘whatever leaves the building, is leaving to be recycled’.”

You can see the coverage here or by following the link: http://news.scotsman.com/scotland/Restaurateur-scoops-green-awards-for.5018420.jp