Vittoria – Celebrating 40 Years In The Business 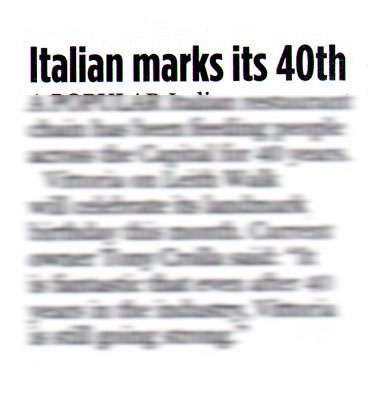 Since 1970 the Edinburgh-based, award winning, Italian restaurant Vittoria has been delivering delicious, hearty, Italian food to our tables.

It celebrated its 40th birthday last month and was featured in Edinburghs Evening News. The short article includes a quote from owner Tony Crolla, and a brief summary of Vittoria’s birthday.

There are two of the restaurants in Edinburgh, the original one, situated on Leith Walk and the other on George IV Bridge.

Tony’s Parents had originally opened up the shop as the Pompas Tea Rooms, he grew up working there and in 1993 he took over. Their only aim was to bring a little taste of Italy to Edinburgh.

The restaurant serves traditional Italian food at an affordable price, making it easily accessible for students, professionals and to families.

Tony says: “It is fantastic that even after 40 years in the industry Vittoria is still going strong. The fact that we are popular shows the quality and longevity of our offering”.

The restaurant experience doesn’t end here, as Tony has embarked on a social media campaign setting up Twitter and Facebook pages for both Vittoria and La Favorita.

He also offers 2 for 1 meals on Tuesdays for all of his social media followers.

As a celebration for the 40th Anniversary, later this year Tony is planning to refurbish both Vittoria restaurants.

The featured article was published in Edinburghs Evening News on the 21st January and the feature of Vittoria was made possible through a social media campaign by Holyrood PR.