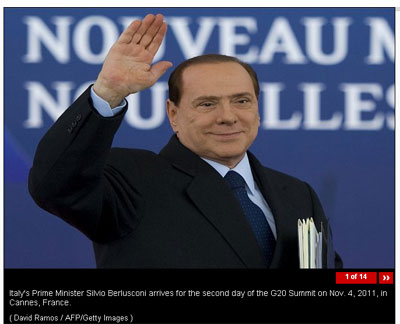 It’ll be the end of an era when Italian Prime Minister and all-round political loony Silvio Berlusconi steps down from his position in international affairs. He’s recently announced that he won’t stand for office again, which means that Italy’s next elections will produce a leader likely to be more respected in the world community – but far less entertaining. So, with Silvio’s end in sight, here’s a selection of his best quotes, gaffes and scandals from throughout the years, in all their horrifying glory. A true one-of-a-kind. High Five
http://www.globalpost.com/dispatch/news/regions/europe/italy/111108/berlusconi-quotes-photos-gaffes

DOES MY BODY LOOK SHAMEFUL IN THIS?  (Laura)

An article drew my attention today which brings to light the issue of body shaming, which exploits the bodies of men and women, showing them to go against the perceived ‘norm’. A woman in America is set to sue an advertising agency after they used a proactive image of her to promote infidelity. Known as Luscious Jackie, the size 32 model appeared unwillingly on an advert for Ashley Madison designed to encourage men to cheat on their wives and find better model. Ironically though Jackie herself is a size 32 porn star with her own online site – which highlights the fraught debate over what is acceptable and where it is acceptable to use the ideas of body image to promote our products and services.
http://www.dailymail.co.uk/femail/article-2059027/Supersized-model-describes-horror-discovering-scary-image-used-promote-dating-site-men-want-cheat.html

I’m getting my paintbrush kit oot this weekend after reading about a very clever street artist who has turned some very ugly litter into pieces of creative genius!  He managed to make chewing gum street splatters into little pieces of art and some of his designs are incredibly intricate including a painting of the perfect English breakfast.  He is apparently pavement bound for up to three hours getting his street art perfect which maybe cancels out the mindlessness those have when spitting it out in the first place.  His mini masterpieces demonstrate that art can be created anywhere on anything when you think outside the box!
http://www.telegraph.co.uk/news/picturegalleries/howaboutthat/3703065/Chewing-gum-art-on-the-streets-of-Muswell-Hill-by-Ben-Wilson.html

If anyone is familiar with Portobello Beach then you will know that it is not always the most picturesque place to be. Especially at night! However, a Portobello man has launched a campaign to paint ‘Welcome to Edinburgh’ in huge letters along the promenade to the promote the seaside suburb to incoming air passengers. I have to admit, it’s a pretty cool idea and will no doubt attract a lot more attention to the beach.
http://www.scotsman.com/edinburgh-evening-news/edinburgh/around-the-capital/porty_s_paul_is_rolling_out_the_world_s_biggest_welcome_mat_1_1952369

TALES OF A TRANSEXUAL (Aimee)

In keeping with the formula that made Seven Dwarfs a TV hit, Channel 4 delves again into the world of another stigmatised social group-this time transsexuals.
My Transsexual Summer implants seven transsexuals on the verge of changing their lives into a house with the aim of exposing the highs and lows of living as a transgender.
The first episode looks at a full gender affirmation surgery of former policewoman Karen, 52, who undergoes the change on camera which isn’t pleasant for the squeamish but is actually pretty fascinating.  In an attempt to calm Karen’s pre surgery anxiety, one of the other residents exclaims “Oh my god how cool would it be tomorrow if you not only woke up with a vagina but it’s been vagaazzled as well!” Brilliant!
This show is less about the science and more about looking at the strength and growing friendships of the characters and their journey through the challenges of being socially isolated.  Great stuff, if you missed it you can catch it on 4 OD.
http://www.channel4.com/programmes/my-transsexual-summer/4od