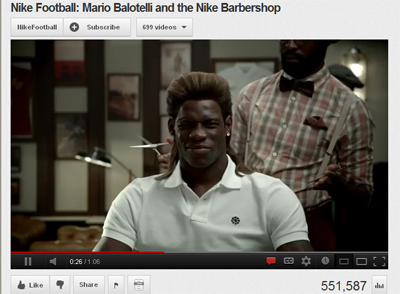 With the season over for football fans all the attention is turning towards the Euro 2012 championship this summer. The big name sponsors such as Nike, Adidas and Puma are investing heavily in advertisement and Nike seem to be creating, as always, great entertaining videos. However, this one is not for footwear or clothing but for a haircut with their new Facebook app.
Controversial striker Mario Balotelli is the front for this video with the set up being in a barbershop and the barber giving Mario a range of iconic hairstyles. With great footballers comes great hairstyles and we see this in the video. One in-particular is Ronaldo’s famous patch of hair during the 2002 World Cup campaign and rumour has it, the reason he opted for this style was so his son could pick him out on the pitch as several players such as Roberto Carlos looked similar from up high.

Are you a fast reader? A new speed reading test by stationery supplier Staples aims to put this to the test.
You are directed to a page where you are instructed to read the text and click a button when finished. No cheating though – you have to answer a series of questions to test your knowledge on the text.
It then generates your result – I was 191% over the national average and based on this it estimated that I could read Tolstoy’s War And Peace in 15 hours. I’ve only ever managed the first appendix and that took about 3 hours alone!

One of the biggest stories in the media this year has been the chronicles of the ever self depreciating Samantha Brick.
The furore all began with an article published in the Daily Mail in April in which she claimed women hate her because she is beautiful which provoked backlash all over the world.
Ms Brick has come back with a new piece published yesterday which is also likely to snowball into further controversy, in which she gives tips for a happy marriage and champions the trophy wife – including weighing yourself in front of your husband!

I’ll be honest, I don’t know much about QR Codes. I know you scan them and they take you to a webpage – or something like that (I should really look into it), but, what I do know is good PR and Guinness seem to have hit the nail on the  PR head with their latest campaign. They have commissioned pint glasses that when filled with Guinness create a QR code. When scanned the QR code tweets about your pint, updates your Facebook status, checks you in on 4square, downloads coupons and invites your friends to join you in enjoying the distinctive taste of  Guinness! The glasses created a buzz over Twitter and generated a lot of online coverage for the brand.

Will.i.am has been publically criticised by the media about his tweeting habits; in particular for tweeting during performances of the BBC’s The Voice UK for which he is a judge and coach. Now the Daily Mail have highlighted another potentially inappropriate episode (depending on your twitter moral code) of twitter use as the American music star is pictured tweeting while carrying the Olympic torch! Will.i.am ran a mile through Taunton, Somerset while carrying the symbolic flame and was pictured typing away updates such as ‘Its nuts here in taurton…so much excitement…#runningthetorch.’ on his phone