Mackie’s of Scotland has enjoyed a huge amount of positive press recently. Hot on the heels of a story celebrating its export success in Asia, we revealed their annual figures – highlighting their planned investments to grow the business and get more people into work.

The story was a huge success, reaching a total of 20 publications, including The Times, The Scotsman, The National, The Press and Journal and even hit the front page of The Grocer Magazine – the undisputed most important publication for the sector. Check our full coverage report here!

Every so often, a story comes around that we know is potentially transformative. That was certainly the case when we were tasked with announcing Commsworld’s amazing £30million contract to transform Glasgow City Council’s ICT – meaning that schools, libraries and all public buildings will benefit from the

After working closely with the council, our story made an exclusive article in the The Herald, followed by fantastic coverage in The Times and The National. Our media report also show a hit across business, tech and mainstream press, including influential publication Holyrood Magazine.

This month has seen us provide a real PR push for our client, Blackwood. The housing and care specialist is welcoming entrants for its annual design awards, which seek to find the brightest and best innovations to help people with disabilities. 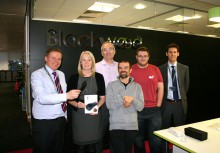 We created a tailored PR campaign, featuring a host of stories about the Awards to raise awareness and give a boost for entries. These included a launch release, an article all about the judges and a focus piece on Robyn Love – Team GB wheelchair basketball star and judge for this year’s awards.

We also produced a case study on previous winner Grant Douglas, who designed the S’up Spoon which helps people with shaky hands to eat. He puts his success down in part to the incredible impact the Awards had on his business.

The campaign generated a host of cuttings across a range of key media titles, including Scottish Housing News, Care Industry News and PosAbility Magazine. You can hear more about our in-depth coverage here. 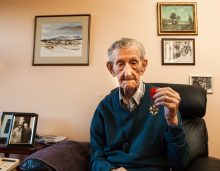 It has been another great month of coverage for our client Bield. We shared the story of a 94 year old resident who had been awarded the highest military honour given by the French Government for his service during the Second World War.

Thomas Gilmour was given the rank of Chevalier in the National Order of the Legion of Honour as recognition for the part he played in liberating France in 1944.

Thomas, who has been a tenant at Bield’s Brae Court development since 1993 had managed to keep the news under wraps for more than six months.

The story was a hit with national publications including The Herald, The Daily Record and The Edinburgh Evening News, and picked up local coverage in the Linlithgow Gazette and the West Lothian Courier.

Let photography and video tell the story for you!

At Holyrood PR, we are always happy to talk to new business and see how we can turn your stories into great media coverage. If you would like to see your business in the headlines like the clients in this month’s HPR TV, or if you’d like to harness the power of video to tell your story get in touch with our PR video team by filling out the form below or call us on 0131 561 2244.

Every story can be told better with the aid of pictures. Images help give...