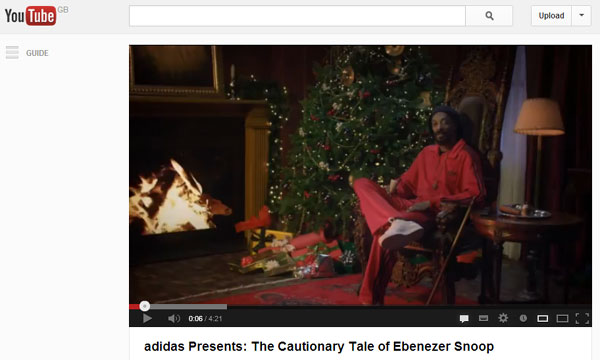 We love a gas-off on social media so drop us a line on Facebook, Twitter, Linkedin or Google +

Who wouldn’t love a Christmas ad that opens with a line like this, then zooms in on a festive Snoop Dog, dressed in a red Adidas tracksuit and seated in a grand high back beside an open fire?
The Cautionary Tale of Ebenezer Snoop is a re-telling of the classic holiday tale but of course in a very Snoop Dogg way.
Needless to say Ebenezer Snoop has lost his holiday spirit…can he find it before it’s too late?
With ‘guest appearances’ from David Beckham and some, this clip is a clever mix of camp crimbo live action and some rather amusing animation to bring this classic tale to the 21st century.
What’s rather charming about this video is that there doesn’t seem to be an alterior motive. In fact it’s a rather heart-warming bit of Christmas fluff to remind us to make time for friends and family and not to get caught up in our own self importance.
http://www.youtube.com/watch?v=w1bIl7tqi8o​

Say the word Kappa and you will probably think about a shiny new set of tracksuit bottoms and if you’re really lucky, the poppers version.
But, I’m talking about a completely different Kappa, one set deep in the heart of Japanese folklore and akin to our ​which can be likened to the Boogeyman.
I caught wind of this mythical beast in an episode of River Monsters which described its taste for children as it lurks in the Japanese rivers.
Drawings of it show it as some sort of child sized turtle, monkey, lizard thing which apparently loves cucumbers to the point of obsession.
Stories of the Kappa continue to this day along with reported sightings. One thing is for sure, it probably isn’t as terrifying as a kid sporting a Kappa shellsuit.
http://www.cryptomundo.com/cryptotourism/japan-hominid-kappa/

We have all seen films where robots threaten to take the world away from their human creators, either through superhuman strength or increased brain power, but have you ever wondered how advanced the robots really being developed have become?  Researchers at the University of Tokyo have developed “Kenshiro” a robot that imitates the body of a 12-year-old male. At 5-foot-2 and 110 pounds Kenshiro boasts 160 pulley-like “muscles,” including 50 in the legs, 76 in the trunk, 12 in the shoulder and 22 in the neck. Check out the link below to see Kensho in action and for some insight into what people think about the robots similarities to humans.
http://mashable.com/2012/12/13/kenshiro-robot/​

After what has been a golden year for our capital, with the Olympics and the Jubilee, the unglamorous side of London has been celebrated in an unconventional awards ceremony.
‘Shit London’, began as a Facebook group for Londoners to post their images of the strange and unusual things they spotted on their travels around the city and is now a hugely successful blog.
The winners of the annual ‘Shit London’ awards have not been revealed which honours the ugliest building, the most depressing view from work and the worst shop names.
Made me chuckle! What’s your favourite?
http://shitlondon.co.uk/

Hosting any Christmas parties this year and struggling for festive-themed nibbles? Then fear not, not only is the solution cheap, it requires only one main ingredient: candy canes. Buzzfeed, in keeping with their insatiable ability to provide extensive lists on pretty much anything, have posted a range of 49 different ways to make things taste like Christmas using only the iconic festive sweet. From candy cane flavoured ice cubes to candy canes dipped in chocolate this list has something for everyone. So, what are you waiting for? Go and get caned.
http://www.buzzfeed.com/peggy/49-ways-to-incorporate-peppermint-into-everything​