A Pick ‘n’ Mix Of Links For Wednesday 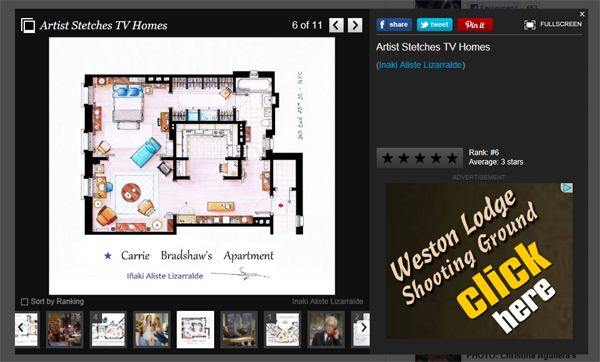 If you want to find out more about the Holyrood PR team why not visit our Facebook and Twitter pages!

As a huge Sex and The City fan, I have always been fascinated by Carrie’s amazing West Village apartment, and even tracked down the filming location when I was in New York.When TV shows are filmed, the locations are usually a real mish mash, maybe an exterior shot from one property, with the interior space split up between various TV sets.Artists Inaki Aliste Lizarralde, Mike Bennett and Brandi Roberts have created floorplans of the homes which have featured in our favourite TV shows, including Sex and The City, Friends, Mad Men and Frasier after watching countless episodes to illustrate their true layout if they existed – with some interesting results.It certainly backs up the claim that Carrie and the Friends characters would never have been able to afford their spacious apartments in New York as waitresses, chefs and writers!                                                      http://www.huffingtonpost.com/2012/08/27/artist-inaki-aliste-lizar_n_1832753.html?1346076526&ncid=edlinkusaolp00000009

As you may have heard, at the end of last week, the courtroom battle between Apple and Samsung came to an end, with a verdict reached. In the end it’s been decided that Samsung infringed on some of Apple’s patents, and therefore, owe Apple $1bn (£664m). In addition to this, the ruling also knocked $12bn off the South Korean firm’s market value. However, things could be about to get worse for Samsung, as a date (December 6) has been set for another court hearing, where Apple will attempt to have eight Samsung devices banned from sale in the U.S. Despite Samsung’s newest device, the Galaxy 3, not being included in the list Apple want banned, could this still be a disaster for the technology firm?http://www.bbc.co.uk/news/business-19407521

THE PEN THAT’S PERFECT FOR THE LADY IN YOUR LIFE! (Scott)

Disposable pen experts at Bic probably thought they’d hit on a genius idea when they developed a pen especially for the fairer sex. Not only is it “designed to fit comfortably in a woman’s hand”, but it also boasts an “attractive barrel design available in pink and purple”. I don’t know if women have flocked to buy them. But crictics have flocked to Amazon to leave scores of hilarious, parody reviews on a product that would probably have been laughed out of the 1940s. Brilliant. http://www.amazon.co.uk/product-reviews/B004FTGJUW/ref=cm_cr_pr_top_helpful?ie=UTF8&showViewpoints=0

It’s the story that has dominated the press for the last couple of weeks and there is no sign that it is about to die down anytime soon. Prince Harry’s antics in Las Vegas have caused major controversy and been subject to a lot of stick in the media. A men’s deodorant brand has used this topical story to come up with a new campaign which hooks on its current message ‘the lynx effect.’ In the style of a ‘Keep calm and carry on poster’ the brand has published an advert apologising to the Prince if his antics had anything to do with it. ‘Sorry Harry if had anything do with us’ will appear in the Sun on Sunday and it suggests Harry had the Lynx effect making him act wild in Vegas. I think this is extremely well done and a great example of a brand making the most of this story!http://www.campaignlive.co.uk/news/1147201/lynx-says-sorry-prince-harry/

I don’t know if anyone saw in the Daily Mail last week, the hand drawn images that could easily be mistaken for professional photography. With the power to share this to billions on YouTube, a man, who goes by the username ‘markcrilley’ draws images that look ‘real’. In this video, the artist rips up a playing card and places the pieces down. He then replicates the exact image next to it by drawing and painting the card. The finished product is amazing down to the last detail and this video has already accumulated over 1 million hits, and it’s no surprise.
http://youtu.be/XuMuGYCW63w ​