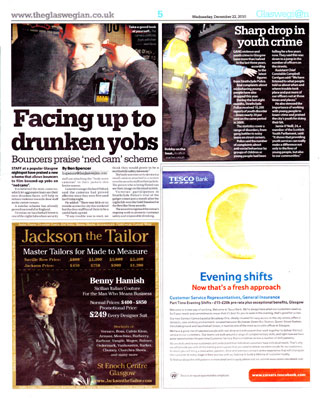 The Glaswegian – a local city newspaper – has written an article on one of the city-centre’s most popular night spots.

Victoria’s – on Sauchiehall Street – took part in a pilot scheme organised by the police to attach cameras to bouncer’s vests.

Not only has the nightclub been mentioned in the article, but the venue’s manager has been quoted in the piece.

The move comes just a month after Victoria’s won a Gold Standard award at the Best Bar None Awards for its onoing work to promote customer safety.

As the owner of Glasgow’s premier night spot Victoria’s, Wayne Gardner Young aims to transform the building next door to the club into a boutique hotel.

Wayne also owns the Buchanan Arms Hotel and Spa in Dryman, north of Glasgow, and Kairn Park Hotel in Bathgate and plans to open an eco-friendly theme park in West Lothian.

The full article can be found on The Glaswegian website was secured as part of a sustained PR and social media campaign carried out by the Holyrood PR.