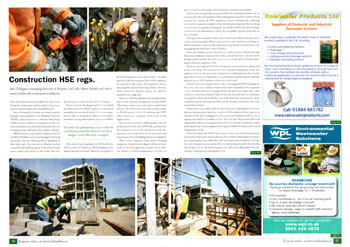 Vibration safety expert Reactec has celebrated a high profile piece of coverage in the UK housebuilding press after highlighting the dangers of Hand Arm Vibration Syndrome in the construction industy.

Managing director Jim O’Hagan submitted an analytical think-piece to Housebuilder & Developer magazine about the issue of HAVS – otherwise known as Vibration White Finger – in the building sector, and how firms need to ensure their monitoring systems are as comprehensive as possible to prevent injuries among their workforces.

Jim argued that HAVS continued to be a major thorn in the side of companies that use vibrating power tools, as workers could potentially make huge compensation claims against employers if they contractedthe disease. However, he added that by having a foolproof system that accurately measured exposure against the HSE limits – such as Reactec’s own HAVmeter system – many firms could avoid these costly claims.

The double page spread was featured in the latest edition of Housebuilder & Developer magazine and was the result of a sustained public relations campaign by Holyrood PR PR in Scotland.