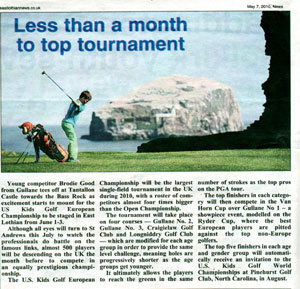 The U.S. kids Golf European Championships have been featured in an article in the East Lothian news.

The European leg of the U.S. kids Golf Championships – took place in early June and saw over 500 young hopefuls take to the green and tee off. The tournament was played out on four courses across East Lothian, showcasing the next generation of golfing talent.

The article carries a picture of young hopeful Brodie Good teeing off from the picturesque Gullane golf course, with the Bass Rock looming presence in the backdrop.

The tournament is divided into both age and gender groups – the showpiece event is the Van Horn Cup played at Gullane. The top five finishers from each category go onto the U.S. Kids Golf World Championship taking place this August at Pinehurst Golf Club, North Carolina.

The article was secured as part of a successful PR campaign carried out by the Holyrood PR.

Working women face reversal of a decade of diversity and progress

Stockists confirmed after waves of demand for newest vegetable snack