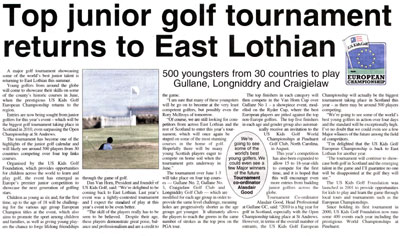 A golfing tournament has made headlines in the newspaper local to the area it is to be played out in.

The upcoming US Kids Golf contest was covered by the East Lothian News.

An article told how 500 children from 30 countries were due to take part in the tournament played on courses in Gullane, Longniddry and Craigielaw.

Running under the headline: “Top junior golf tournament returns to East Lothian” the news story told how children from six to 18-years-old would be taking part in the contest.

The article quoted tournament co-ordinator Alasdair Good, who said: “We are going to see some of the world’s best young golfers.”