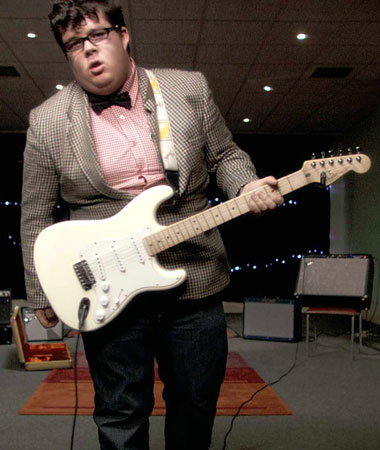 SUSAN Boyle isn’t going to be the only Scot sensation on Saturday’s Britain’s Got Talent final – she’s going to have competition from a bow-tied Glasgow guitar player who’s already blown away a Big Country star in a music advert.

But William Swales, 22, won’t be competing against Boyle – instead he’s making his rock star debut in an advert during the show, though just like Susan, he’s set to wow the internet with his rock god performance.

William is so good in the new Merchant City Music commercial, created by award winning Edinburgh company Plum Films that people are talking about him and not the real rock star in the advert – Bruce Watson from Big Country.

William was such a hit during filming that he has also been used as the face of the company for the music store’s print campaign.

The tounge-in-cheek video for the popular Glasgow guitar shop features William and Bruce amongst a wide range of people playing guitars and rocking out.

Even though the film was shot using the latest digital equipment, the project was delivered on a tight budget and on schedule by the Plum team.

Plum Co-founder Tina Foster said: “William might be a bit late for Britain’s Got Talent this year, but who knows – he might enter next year. The advert was a fantastic result for everyone involved.

“The basic idea behind the video was to create a campaign which would engage the target audience and make for memorable viewing.

“This ad is all about the universal appeal of guitar playing – there’s young and old, male and female in there and the one thing they all have in common is their love of the instrument.

“Director John Clayton spotted William’s ‘talent’ as soon as filming began and knew that he would become a key player in the advert.

“He looks like such an unlikely rock star, but that’s part of his appeal. When he was performing, he just went for it – he was a bit like Jack Black in School of Rock.

People watching William have been so entranced by his performance they’ve actually missed the existing Scottish celebrity in the advert – Bruce Watson from legendary Scottish rockers Big Country – and the advert also nearly had a Simple Mind as well.

Tina said: “One of the make-up artists we use at Plum is married to Derek Forbes of Simple Minds and Four Good Men fame. So we asked him if he wanted to come and join in the fun.

“Sadly, because of touring responsibilities Derek couldn’t join in, but he did set up Bruce coming along to take part and he was a good laugh, getting right into the spirit of things.”

Stow College music student William said: “It was good fun getting involved and I certainly didn’t expect to be on for as long as I was, but now that all my mates know I’m in it, they’re getting ready to spread it far and wide over the weekend once it’s aired on TV.”

The advert is showing first during the Britain’s Got Talent final (at 7.50pm) before being broadcast across the country over the coming weeks.

The advert can be found at: