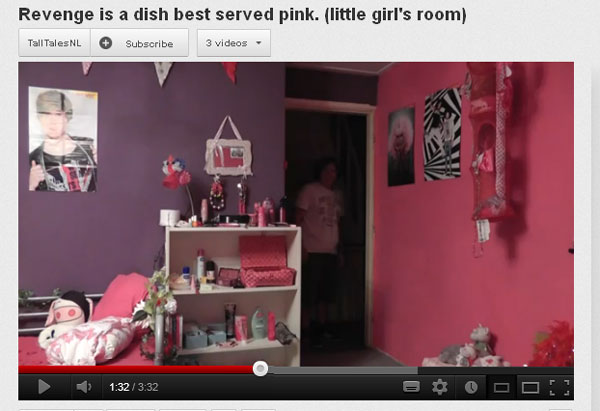 Being a bigger brother I know what it is like to play practical jokes on your younger siblings. I also know what it is like when they prank you and you feel you have to get them back 10 times worse. This is exactly what this Dutch boy did when his younger brother decided to alter his Facebook page completely. He, with a group of his friends filmed themselves altering the young brother’s room, and making it into a pink palace, with Justin Bieber posters on the walls, girl-themed novels, and the brightest pinks and purples. This brother sure got his young sibling back, and, unfortunately for the viewer, the reaction is not what you hoped for. I was looking for rage and anger and to smash things up, but instead, he just called his brother a few names and said “I’m too lazy to turn this back”. All in all this is still, if legitimate, a good prank.

A man whose sister was killed by a reckless motorist was astonished when his sibling’s insurers turned up in court to ‘defend’ the killer driver. The company, Progressive Insurance, acted against their own client to avoid a payout (http://cbsn.ws/ShYRBI). Kaitlynn Fisher’s brother, Matt, blogged about the case on Tumblr, sparking a social media firestorm of outrage. A full rundown of the PR disasters made by Progressive in this shocking case are discussed on the weekly For Immediate Release podcast, #665. Well worth a listen.

Kids selling home made lemonade on the street during the summer is commonplace in the U.S. but the trend has not quite made it over here – probably because our summers are generally not hot enough to necessitate refreshing drinks.
Well, children everywhere should take notice of the story of an 8 year old girl from Fairfax, California who has made a whopping $30,000 this summer selling the sweet beverage – which she will donate to Not For Sale – a charity which fights modern day slavery and human trafficking.
Vivienne Harr began by selling her lemonade for $2 but later changed it to allow people to pay whatever they want – and kind hearted punters have been donating an average of $18 per cup.

A stash of cannabis thought to be 2,700 years old has been found-making it the world’s oldest stash! 789 grams of the green stuff was found buried deep inside a tomb in China and is thought to have been meant for afterlife use although scientists can’t determine whether it was ingested or smoked!
Apparently it was common to provide ganja as an aid to entering the afterlife-I’d like to see that vision up on the big screen!

Growing up pretty much the only TV programme I remember watching was Sesame St – TV being pretty much prohibited in my house between 1995 and 2004. I loved all of the characters; Elmo, Big Bird even Count Dracula (whose incessant counting, even for a 4 year old, got a little wearing). However, my favourite was the Cookie Monster. Not only was he allowed cookies (cookies were treated much the same as TV in my house – I’m sure you’re getting the picture) but he made such a big deal of eating them; crumbs flying everywhere as gruff exclamations of ‘ooo cookie!’ came thick and fast. So, I was intrigued, and not a little thrilled, to find a copy of what claims to be the original Cookie Monster cookie recipe on buzzfeed.com. However, what concerned me enormously, was the lack of chocolate chips in this recipe. It is quite clear to even the most insipid Sesame St. fan, that the Cookie Monster’s cookies are of the choc chip variety. So, recipe people, sort it out, I refuse to have such a vital part of my childhood memories monstrously vandalised in this way.