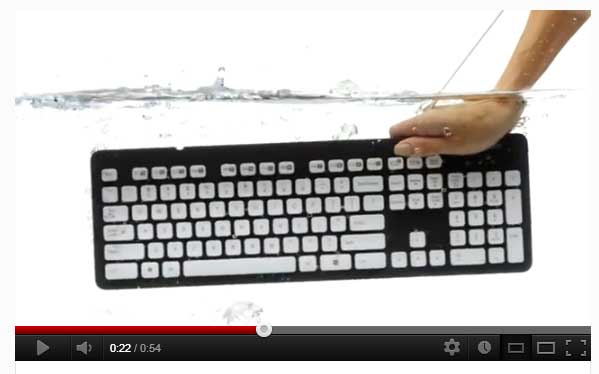 We might like to fill your chops with news hits from the web but we’re also a dab hand on social media so check us out on Linkedin, Google +, Facebook and last but not least, Twitter.

A squeaky clean start to the working day (Rebecca)

Something light hearted but useful today, the invention of the washable keyboard. Now whilst this might seem like a pointless invention, just think about it. Never again will a coffee/red bull/irn bru spillage spell disaster. Instead we can simply carry on typing.
When those biscuit crumbs start to clog up the keys, instead of bringing out the hoover attachments, simply submerge the keyboard in water, from which it will emege sparkling clean.
Why has no one thought of this before?

KNITTING THEIR WAY TO THE WHITE HOUSE (Gaynor)

So today’s the day, the day where American’s decide if they are willing to give Obama one more chance. I’m sure many people would agree that this day four years ago was quite different. The buzz and excitement of finally being able to boot George Bush out and get the first black president in was all too much for the public. Although the hysteria has somewhat died down since 2008 there is a still a large number of Obama supporters out there. You only have to look at the memorabilia on offer with his face on. Doggy jumpers, Lego tributes and patch work quilts are still doing the rounds on the internet, but not one Mitt Romney tribute in sight.

No one can have escaped the recent media frenzy surrounding widespread speculation (speculation, I must add, which seems to be underpinned by a lot of evidence) that Jimmy Saville was paedophile. It has since come to light, also very publically, that other individuals working in the BBC at the time are suspected of similar crimes. The latest stage to this saga is the revelation that a senior Conservative politician was also involved in sexual crimes against young people in the 70s and 80s. The Huffington Post describes how PM David Cameron is opening an investigation into the claims and allegations that the abuse was covered up by government officials at the time.

With the elections heating up, Obama and Romney are racing through battleground states in a final plea for votes. Evidently, both parties have an array of superstar personalities endorsing their campaigns.
In a slightly unusual twist a Witch Doctor from the Kenyan Village where Barack Obama’s father is buried has envisaged a landslide for the US President in today’s election.
John Dimo who claims he is 105, uses shells, bones and other items outside his tent in Kogelo to predict the outcome of the US Presidential election in favour of Obama.

We are big fans of Instagram here at Holyrood PR, regularly posting images of our day-to-day goings on. Powerful images are integral to our work and we are constantly advocating this to our clients, and we find that Instagram is another incredibly useful social media outlet to spread content.
Since it was acquired by Facebook for $1 billion in April of this year, Zuckerberg and co have been making some changes, and the latest has a distinctly ‘Facebook’ feel to it.
Yesterday, Instagram started rolling out online profiles that let people showcase themselves and their photos, reminiscent of a Facebook timeline.
It is definitely a positive step and an improvement on it’s previous online platform, Webstagram.
It will be interesting to see how brands utilise this new tool.