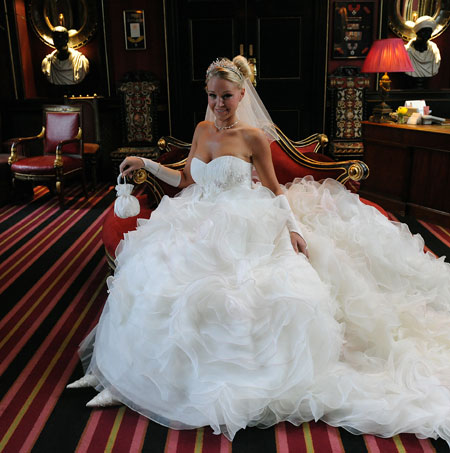 I have mentioned recently the fact that it feels like most of my friends and acquaintances are getting engaged or married. And as exciting as that is for them, I find myself drifting off as intricate pearl threaded veils are described in the minute detail and tears well up at the merest mention of ‘miniature fish and chips’ as a suitable on-the-day food (It was a joke!). However, I have always assumed that for the bride to be, at least, the whole thing is, if stressful, at least worth the effort. After all, it’s her big day, right? Well according to the Guardian online, I’m wrong. For any of you feeling even the slightest animosity towards the bride to be and her rigorous planning regime, check out this link. You may find it’s not all about her but all about you.

Americans are the kings of fast food. Over there, one could dine at a different fast food venue every night for a fortnight and still have plenty of other foodie chains to munch your way through. This desire for fast food has now expanded and is spreading into shops. When you are on the move and don’t have time to pull over for a quick meal, why not have some mash potatoes and gravy…on tap! Yes, that’s right. You can now go into selected 7-eleven stores in America and go to one of the machines created by Maggi, part of the Nestle family responsible for instant soups and stocks. The machine, just like an instant coffee machine, allows you to press a button and it will pour its mash potato mixture combined with water into a small cup and then top it off with some gravy….hmm hmm hmm.

NOW THIS IS A DINING EXPERIENCE…(Alix)

I’m a huge fan of themed restaurants, from 1950s American diners to rustic French bistros, however, this one may be a bit too far for my liking. Modern Toilet is a restaurant in Taipei, Taiwan were it describes itself as a “modern toilet restaurant”. The decor is, as the description says, a full-on toilet theme where all 100 seats in the diner are made from toilet bowls. The food is even served in toilet bowls, where you can have dessert of chocolate ice cream in one of their toilet shaped bowls. Personally, all of it is a bit too far-fetched for me, as when it comes to toilet restaurants, I prefer mine to have more of a “vintage feel”. To see the delectable dishes you could have if you find yourself stuck for something to eat in Taiwan, you can check it out here

An ingenius commercial called, “A World Without Textiles” has been launched to promote Ikea’s new catalogue. US agency McCann led by two Swedes developed the clever 2 minute advert which shows a day in the life of a young couple in a fabric-less world in a cute, whimsical fashion. Highlights include chairs constructed from cacti, rugs made of sand and pillows made from tree stumps – and a bunny rabbit used as a towel!

WALKERS ARE BACK (Aimee)

Walking Dead fans, chins up-the trailer for Season 3 has been released! Not sure if it has caught my attention in the way the others did but I’ll be checking out this body munching bunch again soon!
Anyone else taken a disliking to the kid, Carl!? Hopefully not just me childhating!