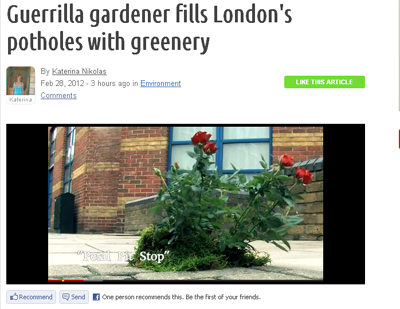 Did you rate today’s offering and want to let the team know? You can tweet us or write on our Facebook wall!

A woman who was left for dead by medics following a massive heart attack astonished her family and doctors when she came back to life 45 minutes later.
Relatives of Lorna Baillie were told there was no hope of reviving her and gathered round to say goodbye as doctors removed all life support.
The most amazing part of this story is that her husband leant over her body, whispered ‘Lorna come back, I love you’ and is if Mr. Walt Disney himself wrote the script Lorna had colour back in her face and came back to life.
This is a fascinating story and already a short video of her in hospital has racked up nearly 2,000 views.

This quirky, yet nutty titled video is a song that I don’t know how I came across online. I suppose it is one of the wonders of YouTube, there are hundreds of thousands of videos just waiting to be watched and everyday a new video is uploaded. This video sings about how a young girl wakes up bunged up and in need of a number 2 and tries everything to flush her system. She then pops on a pot of coffee and then we see her sitting with her Spongebob Squarepants pants at her ankles as she finally goes. A nice little song to cheer up your day.

Steve Wheen has become a fine advocate for the nuisance of pot holes in London by exercising some ‘guerrilla gardening’ to highlight the problem. Whilst most guerrilla marketing is to promote a product or brand this gardener is helping the public vent their frustrations by filling potholes around the city with flowers and greenery. He not only makes these potholes look pretty but adds something extra special with miniature props such as deck chairs and toy cars. Watch him in action here…

SORRY SEEMS TO BE THE HARDEST WORD (Laura)

You may have read our director Scott Douglas’ blog last week about the war between Claire’s and Tatty Devine after the hand made jewellery company accused the high street chain of ripping off its designs via its online blog. Off the back of this Scott was approached by the media team at Ragan Communications and asked to provide comment on the scandal from a PR point of view. Scott along with several other industry experts agrees that the response from Claire’s was too little too late and that by waiting a whole two days to half heartedly reply to the Tatty Devine blog, has done the company more damage than good. The moral of the story here then is to apologise when you have done wrong and do it in a way which is clear, transparent and timely – if Claire’s had done this then maybe a PR fail could have been avoided.

According to a study by MarketTools Inc, the average office worker spends a staggering 13 hours per week emailing.
Supposedly, $650 billion a year is lost due to unnecessary emails, with internal emails being the main culprit.
The French IT giant Atos went as far as banning internal emails last year among it’s 80,000 global employees in the hope of improving work productivity.
Perhaps this is a little extreme, but I believe it does hold some merit.
Who wants to see endless cringeworthy photos of someone’s cat wearing a jumper or to have a colleague email a question they could so easily have verbally communicated?
Anyway, next time before you press send, click on the link below containing a very useful infographic that will help deem your email necessary or a waste of time.